Most days, I spend my time working and generating money to grow my investments.  Today was one of those days that we cashed in some chips for enjoyment and spent.  I didn’t plan on it but shortly after lunch, Aaron told me the custom shirts he designed at Brooks Brothers on January 13th were ready for pickup.  We decided to leave work around 3:30 p.m. to go get them.  We made our way over to the Country Club Plaza, stopped in the Barnes & Noble, where I bought a pound of coffee and a mug, and then went to the store so he could finalize his purchase and inspect the merchandise. I added a Barnes & Noble mug to my collection ... The sun was setting as we headed over to the Brooks Brothers store to pick up Aaron's shirts. The first of Aaron's custom Brooks Brothers shirts ... he ordered his in an ultra-slim fit with a shorter bottom since he didn't want a lot of extra fabric, a French front, mitered cuff, and a English spread collar. One of my favorite things about getting shirts made is the custom labels that are sewn in that most people wouldn't even know exist. Aaron had the first shirt monogrammed in Green and cursive lettering. The shirt is bright white but the camera wasn't picking up the color correctly; it could have been due to the low lighting. On his second shirt, Aaron went with a really subtle white monogram that most people won't even notice. A closeup of the fabric on Aaron's second Brooks Brothers shirt ...

After that was done, we stopped by the Apple store at picked up a new 17″ MacBook Pro.  I told you in the post about my technology setup that we were waiting for the product line refresh.  Turns out, the wait was less than two weeks!  For the same price as we would have paid 14 days ago, we got a system that is almost twice as fast. 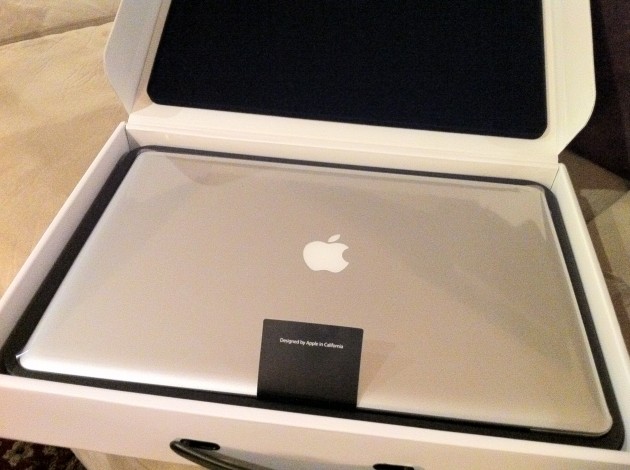 Unboxing the new 17 Inch MacBook Pro was like Christmas morning, only for grown ups. No matter how many systems I have, every time I break the seal on one and turn it on for the first time, it is like magic. I used the Gigabit crossover ethernet cord to transfer most of my systems from the old MacBook Pro to the new MacBook Pro. Then I cleaned off the old system, deleted unnecessary programs, installed upgrades, and handed it off to my mom so she could have another system. In fact, this is the first post I've written on the new MacBook Pro.

After we left the Apple store, Aaron mentioned he wanted to swing by Nebraska Furniture Mart because he wanted to buy a Playstation 3 and a few new games.  There still hasn’t been anything on the system that I wanted to play but I didn’t object so we headed over there and bought one along with an extra controller at three or four titles.  I picked up “3D Dot Game Heroes” for myself, which is supposed to be a 3D 8-bit adventure game in the spirit of The Legend of Zelda.  In the store, I was laughing because here we are with all this awesome technology and I had just chosen a game because of 8-bit nostalgia. This game is basically an homage to 8-bit games on the old NES such as The Legend of Zelda. They are 3D versions of 8 bit adventure classics. Apparently, this is supposed to be one of the best games of all time and is almost perfectly rated so we bought it, too. It looked really good when Aaron started it tonight.

We swung by McDonald’s on the way home, stopped by to drop something off at my sister’s, and then my mom came and got the old MacBook Pro for herself.  I also picked up a new black bumper for my iPhone, some books through my iPad, some movies … I’m getting more comfortable spending money but it would be dishonest to say that I still didn’t calculate the loss of compounding value in the stores.