When I was 14 or 15 years old, I met Molly in freshman year gym class at the high school in Missouri we both attended.  Somehow we became best friends, though I can’t tell you how it happened.  It just evolved and she became part of my family.  It was rare, especially at that age, for me to meet someone who was my intellectual equal, and finding her was like finding an oasis in the desert.  I could talk to her, completely unrestrained, about topics ranging from religion to politics, economics to science, and she had a deep understanding that went beyond knowledge.  After graduation, she went to New Mexico, I ended up in New Jersey.  Just like family, over the years, and thousands of miles, we remained close, sometimes speaking more frequently and sometimes letting too much time pass, which was often my fault.  We’d get together on holidays, especially Christmas, and go out to coffee whenever we had a chance.

[mainbodyad]Molly was, and is, as wise as I am brilliant in certain areas.  Besides my parents, her influence in helping me become who I am is second only to Aaron.  Every one of you, who has ever learned anything from my writings, owe her an enormous debt of gratitude.  Knowing her has made me a better, kinder, more patient, and more compassionate man.  Early in life, she managed to help me connect my heart and my head, assuring me that they could be integrated; they were not mutually exclusive paths.  She also taught me that the love of Christ is the highest, and hardest, standard, something that I continually struggle to live up to in my day-to-day life, and which I continually fall short of, time and time again.

Several years ago, we went out to coffee at a local coffeehouse on the main highway in the town where we went to high school.  She told me how she was ready to meet someone; to settle down; to become an “us” rather than a “me” so that the journey was one that was done hand-in-hand with someone who, in old age, had been there since the beginning, building a life, little by little, day by day.  Knowing how wonderful it had been for me, and how much meaning my marriage gave my life, I wanted it for her.  And now, she has found him.  I am so grateful that I got to be there to experience and celebrate their marriage.  It was worth the 1,800 mile round-trip excursion. 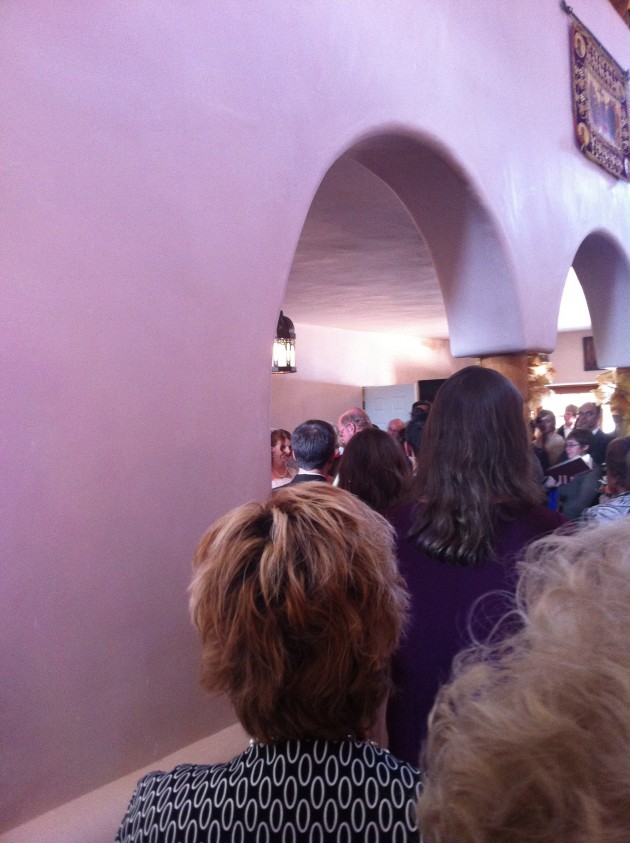 If I understood it correctly, the betrothal ceremony held immediately before the wedding ceremony, was the legal, civil part of the marriage, when rings were exchanged and the marriage officiated for the state to form a new household. Then, the marriage sacrament itself was performed within the Church, in the actual marriage rites ceremony, before God, which was the religious component.  Thus, the first segment was the civil, government marriage, and the second segment was the religious, spiritual marriage.  I’m sure I got something in there wrong, but I was trying to read and understand everything I could during the process. Then, the bride and groom took their first steps as a married couple. The symbolism: “The priest then leads The Bride and The Groom in a circle around the table on which are placed the Gospel and the Cross, the one containing the word of God, the other being the symbol of our redemption by Jesus. The Bride and The Groom are taking their first steps as a married couple, and the church, in the person of the priest, leads them in the way they must walk. The way is symbolized by the circle at the center of which are the Gospel and the cross of our Lord. This expresses the fact that the way of Christian living is a perfect orbit around the center of life, who is Jesus Christ our Lord. During this ceremonial walk around the table a hymn is sung to the Holy Martyrs reminding the newly married couple of the sacrificial love they are to have for each other in marriage – a love that seeks not its own but is willing to sacrifice its all for the one loved.”

The wedding reception was held in a state park up a mountain.  It was beautiful.  I was fortunate to meet a lot of very wonderful people across all different walks of life. Molly and Joshua’s Wedding Cake. I knew I was going to like the reception the moment I saw the dinosaur in a top hat. The sunset was amazing at the reception site … Molly and Joshua at Wedding Reception in Park

There was Ethiopian and Egyptian food, as well as some fantastic lemonade with mint in it (at least that is what it looked like).  I didn’t try the other spa water, which is shame.  We ended up driving back to the hotel after dark, getting lost on the way, and toward midnight, ordering club sandwiches and iced tea as grandma went back down to the casino.  It was a fantastic day.