Following dinner at Narcoossee’s on the grounds of the Grand Floridian hotel and resort in Walt Disney World, we decided to head back into the Magic Kingdom tonight to do some shopping and maybe see a few attractions.  We ended up looking at collectibles for most of the time. We left the Grand Floridian after dinner at headed toward the dock to board the boat to take us to the Magic Kingdom. We arrived on the dock ... sunset was to begin shortly. 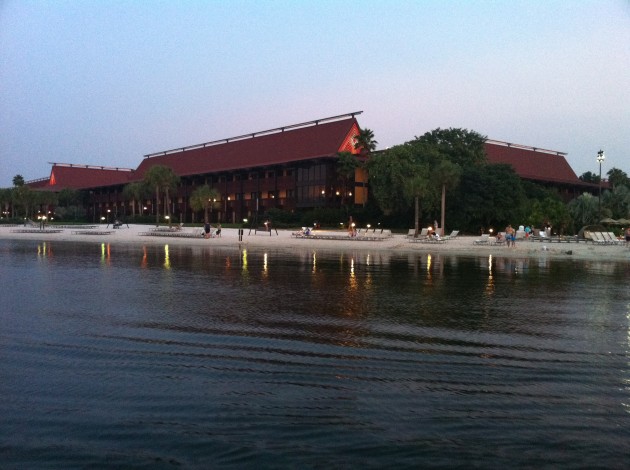 We had to stop at the Polynesian resort, which was hosting a Hawaiian Luau. As we made our way to the Magic Kingdom, the Grand Floridian looked beautiful in the sunset. Both Aaron and I loved the ceiling in the Emporium on Main Street in Walt Disney World. Before the trip was over, both Aaron and I purchased a Walt Disney World 40th anniversary track jacket. We bought a couple of Walt Disney purses as gifts for some of the women back home. The brilliance of having a strong intellectual property asset is that it allows you to create emotional connections with customers, who will pay you for good feelings associated with your property. This Walt Disney t-shirt shouldn't have cost more than $1.00 to manufacture, yet it retailed for something like $16.95 (I don't remember the exact price). That provides enormous margins for a company that sells directly to customers through branded theme parks. We left the Disney Emporium and headed into the collectibles and art gallery, which is more of my scene. I liked the Arribas jeweled Disney statues and collectibles. Had they a Scrooge McDuck, I would have bought it on the spot. But, alas, they did not. Even more Arribas limited edition Disney collectibles ... they need to do big figurines of all the villains. I'd buy those, too. I absolutely loved this burl wood matte on the Disney art. Matching it to the frame was fantastic. I might have to use that for some of the financial art I have, like old bond certificates from 100+ years ago. They even had jewel encrusted miniature Disney collectibles arranged by storyline and theme. I liked something about the juxtaposition of the mirror style on the background wallpaper. This is here for my own future reference. The miniatures at the gallery ... I loved the fact that the Disney mint chocolates were produced in "Reserve Notes" and produced by the Disney Mint. After shopping, the party disbanded for the night and I walked around the park with Aaron for awhile before going back to the Animal Kingdom resort. I passed the iconic teacups and took a picture.

I’m going to go back to my room and probably read for awhile.