Behind the Scenes Hammond’s Candies Factory Tour in Denver 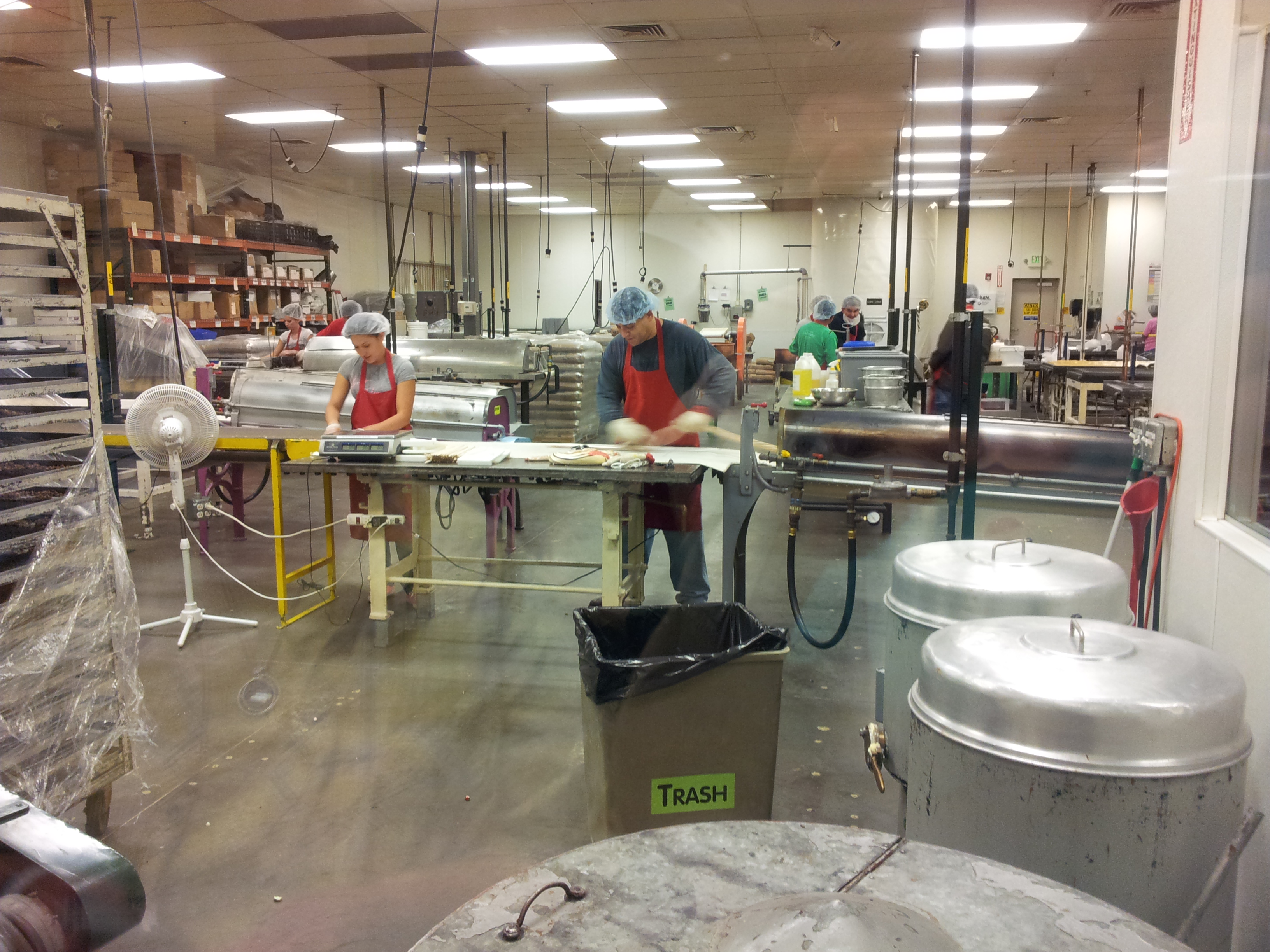 Later today, my grandmother is meeting up with her nephew (his grandmother was my great-grandmother), but before that happens, we are scheduled for the Hammond’s Candies Factory tour in Denver.  Hammond’s is one of the biggest old-fashioned hard candy manufacturers on the planet.  Personally, I’m not really much of a hard candy guy – I’d rather own something like Little Man Ice Cream – but I do love a good business, especially touring production facilities (I’m always interested in how people structure things), so I was excited about the chance to run some numbers in my head as we learned about poundage sold, ingredient lists, and product line profiles. This is the outside of the Hammond’s Candies factory, tour where we on the brief behind-the-scenes walk to see the manufacturing process of the business.

Before you go on the tour, you spend time in the retail shop, where the dozens of varieties of flavors made by the hard candy company are on display and available for purchase.  The retail shop was a brilliant idea. It serves as an inventory storehouse, generates cash, makes people not mind the wait until their tour begins, and has the opportunity to hook the customer on the product. When you walk through one of the main doors of the Hammond Candies retail shop, this is the site that greets you. There were lollipops of every flavor imaginable, from root bear to cinnamon, bubble gum to cherry, grape to evergreen. The Jelly Bean wall at Hammond’s Candy factory tour retail store was nicely done. Whomever is responsible for the branding, down to the individual shrink-wrapped packages, really did an excellent job. The chocolate counter looked delicious but I was too interested in the business and structure, studying everything I could, to get anything from it … Even the nutrition packaging on the filled candy canes was consistent with the brand image.  It wasn’t just slapped on there like some other confectionary companies. The chocolate bars were delicious, especially the S’mores Bar, which was filled with liquid marshmallow. The seasonal displays were well done for the geographic region demographic profile. There were more flavors of candy in the hard candy bit jars. Hammond Candies Giant Lollipops and Ribbon Candy … Hammond’s is one of only two companies in the United States that still manufacturers ribbon candy. The giant lollipops are monsters, weighing in at 10 ounces. A closeup of the Hammond’s Candies giant lollipop … 10 ounces is a whole lot of candy. We were let back into the factory, where a tour guide explained the process of candy making to us.  He said that Hammond’s does approximately 1,200,000 pounds of candy a year, and looking at their wholesale catalog and retail store configuration, it is clear that almost all of that is in the form of hard candy.  It’s hard to say, but it seems like on a wholesale basis, revenue is almost assuredly somewhere between $10 million and $20 million per annum based upon a conversion of retail prices to wholesale then applying it on a per ounce basis to the annual poundage production.

[mainbodyad]Without knowing product mix, though, it is hard to pinpoint.  The biggest risk, in my opinion, would be raw sugar prices and corn prices on the commodity market because the two main ingredients are sugar and corn syrup.  There are approximately 130 employees.  I would expect the business to generate net income in the low seven figures annually, but that is impossible to say without knowing the employee benefits, average payroll hour expense, etc.  I’m getting sidetracked now, but I was running figures in my head during the tour trying to value the various components.

The firm is still family owned, as it has been since 1920, so who knows what the balance sheet looks like.  I’ve seen some family firms where the main business is a small part of the overall net worth picture because the family members used the profit to expand into apartment complexes and banks, building an empire in plain site that not even their friends realize exist.  I’ve seen other family firms where the business has been bled dry and on the brink of bankruptcy by poor management or excessive dividend payments to stockholders to support a lifestyle that the family members could not afford from their own human capital were they to rely solely on the job market.  It comes down to the competency and culture of the founding family.  Every family is different. The hard candy mixture, after being made and wrapped into an enormous block, is run through a machine that twists it, mixing the flavors for that particular candy cane. It comes out quickly, and the table in front of the employees has measurement marks. The employee on the right, near the machine, cuts the candy with a giant pair of scissors before it cools, and the employee on the left forms it into the familiar candy cane shape before putting it on the conveyor belt to go to packaging, where it is shrink-wrapped. Adding air to the mixture of corn syrup, sugar, flavoring, and other ingredients by putting it on a machine that pulls and stretches it, causes the candy to become shiny.  This room is kept between 90 and 105 degrees due to the heat needed to make the candy. Hammond Candies Factory Workers Shipping Candy. The shipping room was kept much colder than the candy making room, at 70-some degrees. The next few hours, we will be meeting my grandma’s nephew, who owns a chain of chiropractic offices throughout the greater Denver area, as well as his family.  She is so excited to see him, and I know my mom adores him, so it should be fun.  In any event, I know myself – I’m going to be running the financials of the candy manufacturing business the rest of the day, drifting off in mid-conversation thinking about worker compensation costs (how bad is Colorado to, say, California, which is horrible, or Utah, which is fantastic?). My grandma’s nephew met us after the Hammond’s Candies factory tour. We went to lunch with him and his family, which was really enjoyable.