Lunch at Yak and Yeti in the Disney Animal Kingdom Park The safari this morning was awesome but it is now getting excessively hot so we are going to go into our lunch reservation at the Yak and Yeti early.  After that, it’s roller coaster time, specifically the Everest Expedition, which is the Florida Disney World equivalent of the Matterhorn at Disneyland in California.  The restaurant is Asian themed, with Malaysian, Chinese, etc. food.

Appetizers at Yak and Yeti 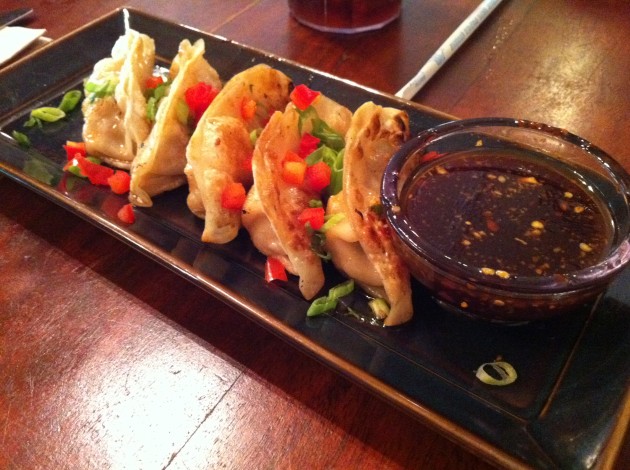 For my appetizer, I ordered the pork egg rolls with chili plum dipping sauce.

Main Dishes from Yak and Yeti I had the tempura chicken, broccoli, carrots, and honey sauce as my main Yak and Yeti dish. Ashly ordered the slow-roasted pork ribs, hoisin BBQ sauce, chicken fried rice, and sweet chili slaw. When it arrived, it was so much more food than expected that everyone laughed; she ended up having to send back a lot of it. Desserts from Yak and Yeti Ashly, Ian, and I all ordered the fried wontons, which feature skewers of fresh pineapple and cream cheese wontons, vanilla ice cream, and honey vanilla drizzle. They were out-of-this-world amazing. Review and Value for the Money

The Yak and Yeti restaurant is technically not owned by Disney, it’s run by the same parent company as The Rainforest Cafe.  For the four of us, the total came to roughly $175 (around $145 for the food and $30 for tip).  For what it is, it is very good.  Don’t go here expecting something like The California Grill or Narcoossee’s, but for good Asian-inspired cuisine, it’s nice.  In the Animal Kingdom park, I’d definitely go back here.  In fact, I’d go back specifically for the fried wontons on their own because right now they sound amazing … I want fried wontons …