My brother’s white coat ceremony for medical school was this past Saturday!  We went to cheer him on as he was assigned to his docent, with the internal medicine experience up first.  (Though he’s part of the class of 2019, I think he’s graduating in 2018 because of however his particular academic experience and credit history happened to coalesce.  I’m not entirely clear on how the mechanics work.  Whatever it is, it won’t be long before we’re calling him “Dr. Kennon”.)

Those of you who have been around since this was a blog for my Great Aunt Donna know that, in the family tradition of not following any of the established rules to get where we ultimately end up in life, he took a unique route to this point – a career in the U.S. Air Force, part of which was deployed in the Middle East in an active war zone, time in the Missouri National Guard working as a loadmaster on airplanes, an undergraduate science degree in biology, meeting and marrying the love of his life, and then working to become a doctor.  Of course, the part that especially warms my heart is that all of those years of shoving his military earnings into accounts over which I have power of attorney mean he won’t actually have to save anything in his medical career and he and Tara will still retire rich.  While his fellow airmen were out buying new cars or renting expensive apartments, he trusted me, slept on an air mattress in a shady part of St. Louis, and shipped his funds into tax shelters to let me acquire whatever I wanted for him.  As we sat in that ceremony, cash was flowing in from around the world because of past good decisions he made.  Every time you eat a Hershey bar, drink a Coca-Cola, bleach your towels with Clorox, spice your food with McCormick, take a sip of Johnnie Walker, order a coffee at Starbucks, take out a loan at Wells Fargo, pay your car insurance bill at GEICO, stop for a Quarter Pounder at McDonald’s, fill up your car at an Exxon or Mobil station, shave with a Gillette product, or use most products or machines in hospitals among the many, many, many other things he owns, you’re putting money in his and Tara’s pocket.  He once joked that even when he’s earning a comparably huge salary after picking his specialty in medicine, he’ll probably be the only doctor driving something like a used Toyota into the staff parking lot so he and his wife will have more money to invest.

And Tara plays such a huge part in that, too.  They are so well suited for each other and a team in every sense of the word.  One of the reasons he was able to get here quickly, compressing so much of his academic experience into such a short period of time, was because they sat down and made a decision about how they wanted to proceed as a couple, united in purpose.  He became a full-time student while she worked, allowing him to study instead of thinking about bringing home a paycheck.  It is an equal partnership.  They both want the other to be happy and will put their marriage before anyone, or anything, else.  (That is one things for which I am extraordinarily grateful.  Of the three older kids who are wed, we all married perfectly; spouses who make us better and augment certain parts of us.) We spotted him backstage before the white coat ceremony began … My brother getting his white coat! Afterwards, we went to a reception (where they had rather good double chocolate cookies with white chocolate chips).  Aaron and I took a bite, looked at each other, and said, “One more?” 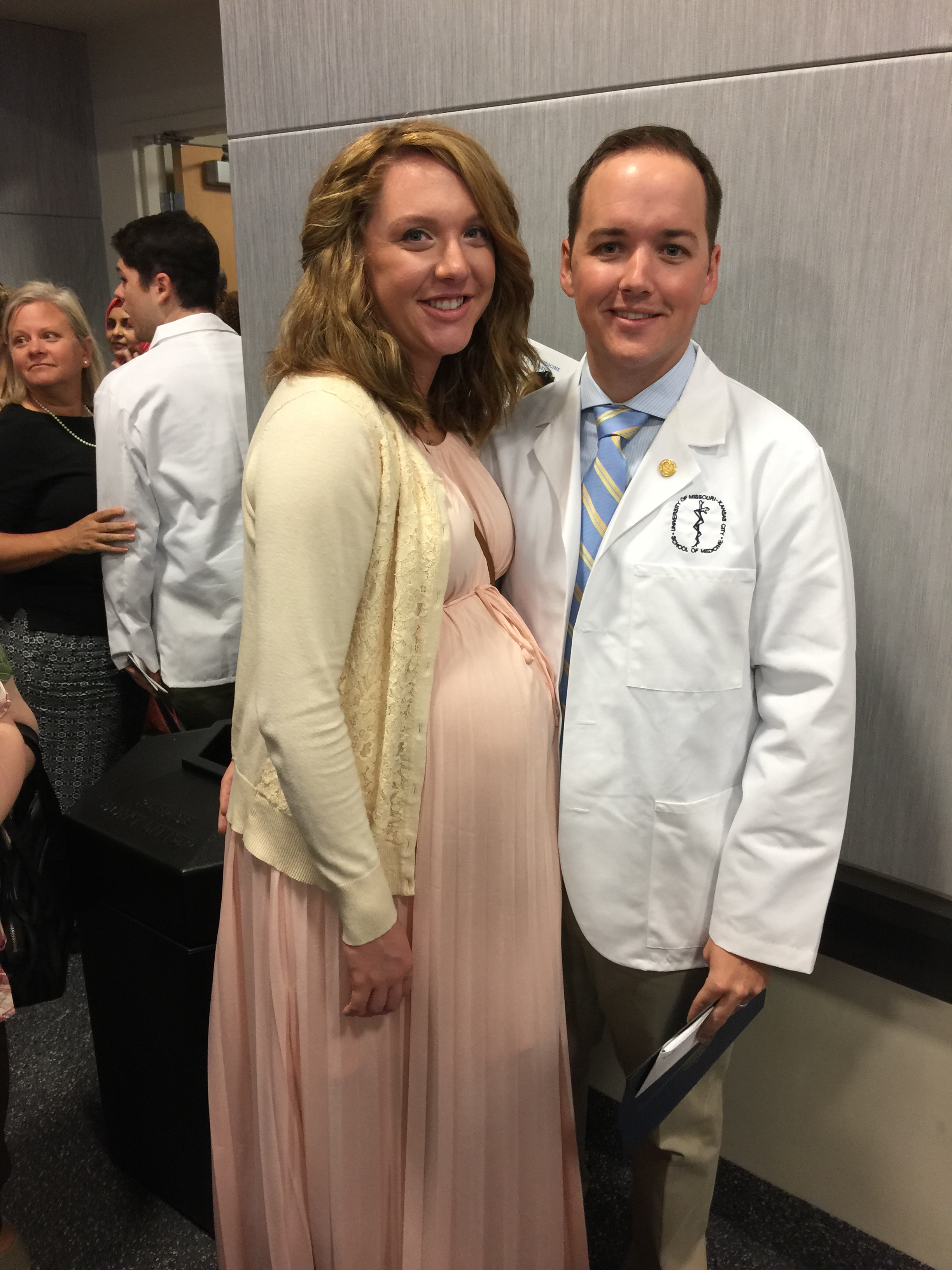 Tara is now past her due date! The baby was supposed to arrive yesterday. They are going to induce labor if my niece doesn’t get a move on and make her debut in the world. Within the week, we’ll have another Kennon! UPDATE: The baby has been born!  Suffice it to say, my brother’s week was incredible. Caleb’s niece congratulating him. Seriously, this kid is awesome. She is one of the funniest people I’ve ever met. At family dinners, I’ll be reading by myself off in a corner room during some down time, she’ll show up, ignore the investment papers in front of me, and launch straight into, “Okay … here’s what is happening. We’re doing this and your role is to do [insert instructions here].” or she’ll show up, sit down, and start telling me the most hilarious secrets as if we had already been in the middle of a conversation, “So, this one time, my dad …” or “There’s this lady at …” Grandma Kathryn made the journey! She’ll be 84 years old this year. She made Aaron and I promise to come down and play bingo with her before the next family dinner in October. I said we would so we’re going to do it.  I’m looking forward to it.  The last time we stopped by, she was out with friends and family at a 4th of July celebration so we missed her. Behind our family (that’s my mom, Tara’s dad, Tara’s mom, and Grandma Kathryn) there was this huge family. That made me really happy. At the very end, our other sister, her husband, and her kids showed up as a surprise! That was awesome! 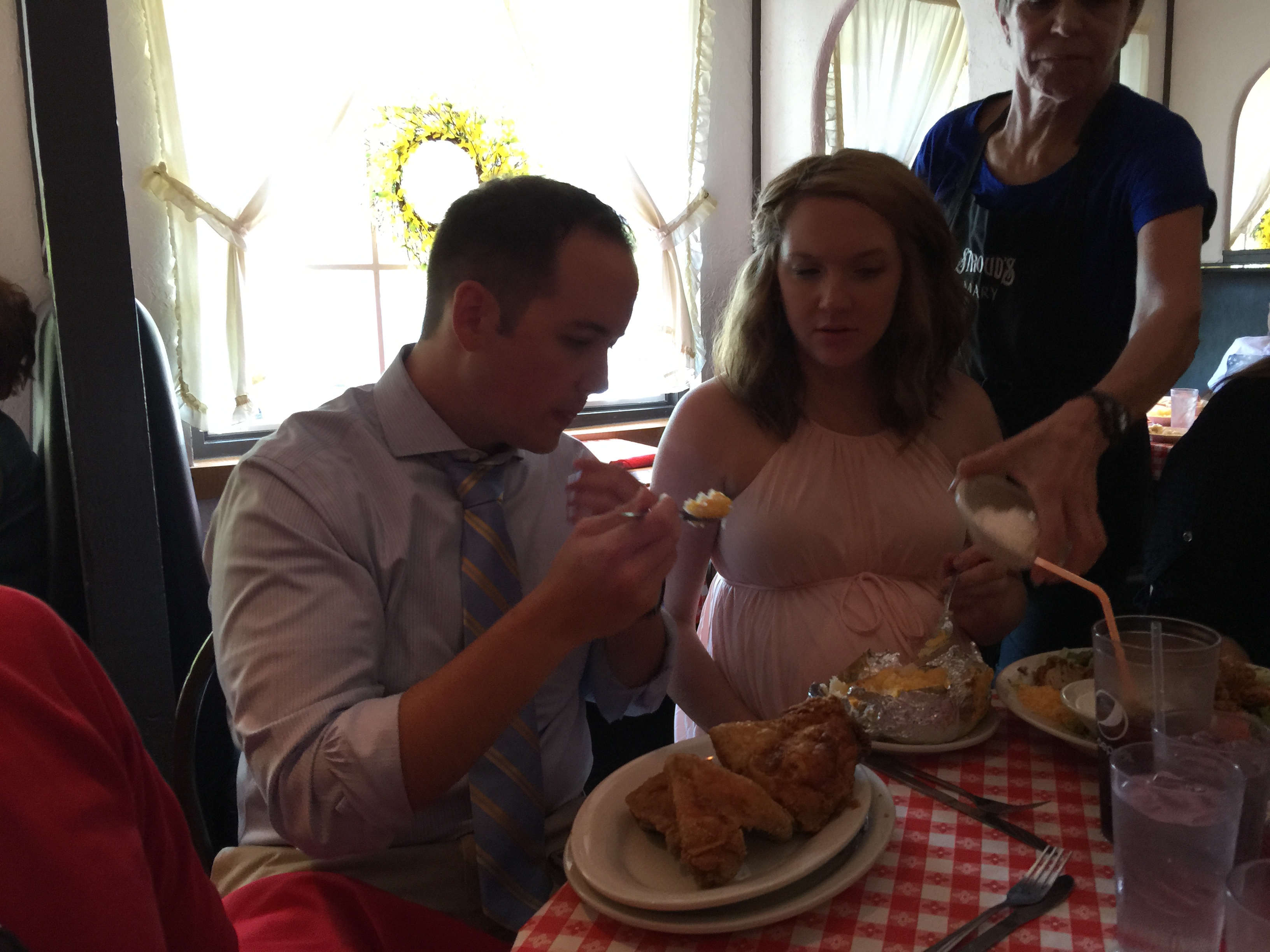 When it was all over, Grandma Kathryn headed back home and the rest of us went to Stroud’s, the famous chicken place in Kansas City. This is where we eat with our friend Jimmy when he’s in town. (This particular location is near the Country Club Plaza and not the other one I showed once.)

I have so many more pictures but if I post them, I get the feeling I’ll be disowned since I didn’t get permission to share them publicly so they have to stay private for now.  If you’re a member of the family and want to see them, send Aaron a text or something and I’ll try and get them to you directly.