My Day In Pictures – The Capital Grille in Kansas City We took my sister-in-law to downtown Kansas City today to meet my brother-in-law on his last day at work.  For the past few years, he was involved in the account records department at State Street, the global financial giant with $25 trillion in assets held in custody.  I could be wrong, but I believe he was responsible for, among other things, calculating the net asset value of mutual funds and transmitting that information to the stock exchanges for them to update after the closing bell.  I’m not entirely certain, though.  He’s moving on to other work, as well as getting his pilot’s license, so it should be a good change.

Once we had completed that, Aaron and I ran down to the Country Club Plaza to drop off a MacBook Pro, which had been upgraded to a solid state drive, to have the staff there reinstall the operating system so we didn’t have to deal with it.  As that was happening, and Aaron was picking up an iPod nano for me (we went walking 3.2 miles yesterday and I realized none of my existing iPods or other electronic devices is really conducive to outdoor activity even though they work perfectly in a gym), I was walking the aisles of Barnes & Noble, Frappuccino in hand, buying the Game of Thrones books.  I am hoping to read this summer if I have the time; a hypothetical that seems doubtful at the moment. I didn’t take many pictures – I was too busy enjoying the day, but we decided to try The Capital Grille, which was supposed to be very good.  It was.  I had a dry aged steak au poivre with Courvoisier cream sauce and a side of broccoli with a French onion soup before the meal, and Aaron had a bone-in something-or-other with butter and shallots, his side being a basket of truffle oil fries.  If you live in Kansas City, you should try it.  After tax and tip, the total was a bit more than $150, and we didn’t order any alcohol, so it’s not cheap or anything, but it’s definitely top shelf.  We will both be returning in the future.  The Yelp reviews were spot-on about the place. 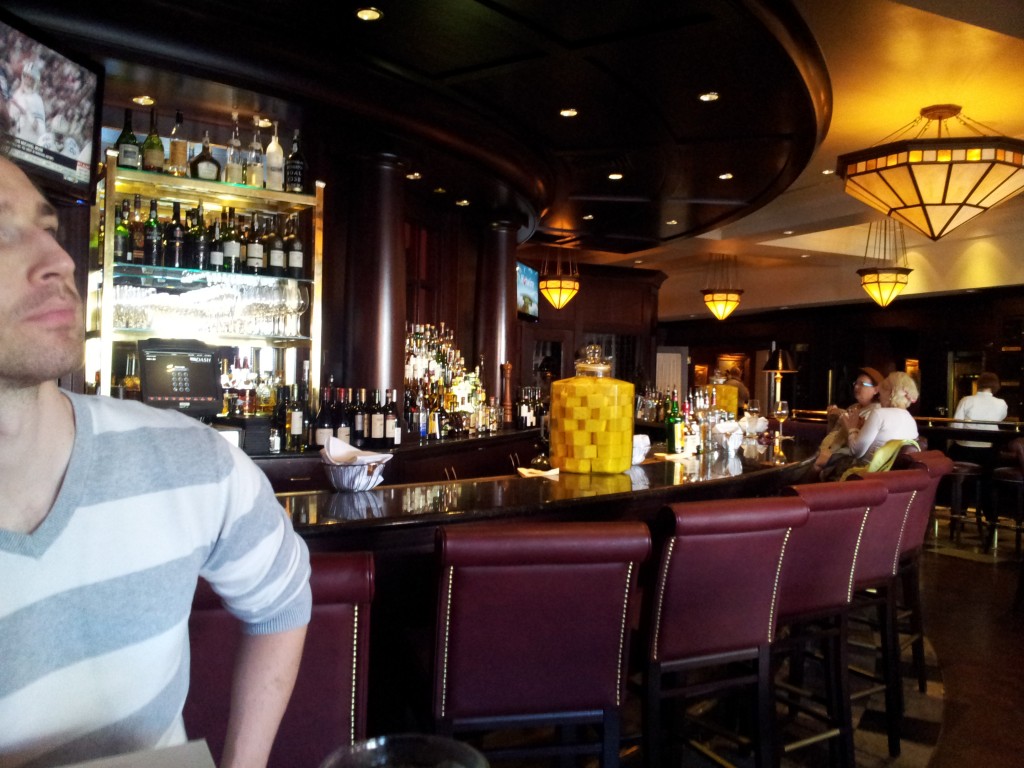 I had a dry aged steak au poivre with Courvoisier cream sauce and a side of broccoli with a French onion soup before the meal, and Aaron had a bone-in something-or-other with butter and shallots, his side being a basket of truffle oil fries.  Mine was good, but Aaron’s was out-of-this-world.  I know what I’m ordering the next time we return.

When we were done, we ended up looking at some houses on Ward Parkway – if we stay in the Kansas City area for another five or ten years, I’ll probably move there depending on the tax differential between the Missouri and Kansas sides of the border – before stopping in the local Steinway & Sons dealership to see if anything new happened to be on the floor.  My biggest problem with the Steinway distribution model is the markup.  A new Model B in a traditional satin finish is $91,600 + sales tax + delivery.  By the time all is said and done, you’d be looking at $100,000.  Meanwhile, you can buy a barely used one, with absolutely no difference in quality, for half that price on the used market.  Of course, you have to know pianos, so if you were a heart surgeon or lawyer who just wanted an excellent model for your home, it would be better to go in and buy from the dealer.  But if you know the instruments, you can easily save yourself very large amounts of money.  If you were particularly crafty, you could approach a non-profit, such as a music school, and offer to buy out one of their newer instruments for a quick turnover profit to them and a price that is unthinkable to you.

[mainbodyad]If you buy at the wholesale, used price level, the instrument itself should keep pace with, or even exceed, inflation, so there is no real expense in the classic sense of the word.  If you care for it, getting your money back out of it over long periods of time shouldn’t be a problem if past experience (100+ years) repeats itself.  That’s what happens when you get the best, in most goods.  There are fully restored Steinways from the 1800’s still sitting on concert stages.  Besides Bosendorfer, and a few other niche brands for the high end market (e.g., Blüthner, Fazioli, Bechstein, etc., which the typical American is going to stare at you blankly, not realizing they are the musical equivalent of what Bugatti is to cars), the economics on the high end are far better than those in the mid-tier and low-end.

(For those of you who care about these things, the Blüthners have a very distinct sound that I find interesting; here is the same piece on a Steinway, which is much brighter.  I find the Faziolis with a sound somewhere between the two.  I find the Bechsteins to be a bit too “tingy” in the upper register, but this is entirely personal preference.  If you love them, I get it.  There is no need to write me passionate hate mail; I know how these things go.  And, obviously, the Bosendorfers are magnificent – they feel more like an intimate moment when you are sitting alone with your spouse, rather than a friendship.  There is just something different that is hard to explain.  It comes, in part, from the wood.  The spruce wood is grown in the Austrian mountains at 1,000 meters or higher altitude under certain humidity conditions and can have no branches with spacing between tree rings of 1mm or less.  It changes the way it sounds relative to the other top-tier brands.  I mean, listen to how you can almost make it sound as if you are in an abandoned house in the forest surrounded by mist.

So much of it depends on the piece and your mood.  For example, throughout the height of his career, Elton John played almost exclusively on Steinway & Sons pianos, but kept wanting a brighter, and brighter, and brighter sound.  He finally switched to Yamaha pianos two decades ago (they make a special upper-tier series that are way above the quality construction you get in the lower Yamaha lines so he’s still playing on a fantastic instrument), which why his music from the 1990’s-to-today has a very different piano sound than the stuff in the 1970’s.  To experience it for yourself, listen to this modern recording of Levon and then compare to him playing it on a classic Steinway in 1971.  Focus on his piano playing.  The sound is radically different.  I wish he would go back to the Steinway, myself.  It sounds more balanced.  The tipping point came in the 1980’s during the Live in Australia era.  He was playing on a white Steinway that he had voiced so aggressively it sounded like tin coins being thrown in tin cups.  Listen to it yourself.  The downbeat at 36 seconds and 50 seconds is indicative of how far he had gone in regulating the hammers.  He essentially stripped all of the bass out of it.  I never understood why he became so obsessed with the clingy sound during those years.)

I swore I’d buy myself either one of these, or the Bosendorfer Strauss model, by my mid-30’s, despite the compounding loss, which is enormous based on the case study I wrote in the early days of the blog.  That will be the point at which I am personally willing to ignore the loss of dividends, interest, and rents on the capital because the utility of upgrading from my perfectly fine 6′ mahogany grand will be worth the opportunity cost.  If I do pay retail, and I buy a brand other than Steinway, I will probably fly to New York and visit Allegro pianos, tracking down the gentleman who let us walk the show room with those magnificent instruments a couple of years ago during a business trip. After leaving the store, we stopped in a McDonald’s so I could get a cup of coffee and Aaron wanted an ice cream sundae since we were too full for dessert earlier at The Capital Grille.  The new McDonald designs are far superior to the old one.  I wish I had gotten more shares in the $80’s.  The dividend yield on cost five years from now would have been very attractive.  It’s hard not to make money under those types of situations, even if things do go bad for awhile.  As long as you pay cash for your ownership stake and can hold through the darkest days, decisions like that tend to turn out extraordinarily well.  C’est la vie.  I’ll keep my eyes open for it and hope I get another bite at the apple; er, Big Mac, in this case.

When I got home, our tickets for Disneyland had arrived via FedEx, I took care of some work, and I noticed that the yellow Canary rose bushes flushed.  If only they were continually blooming, I would plant more of them.  Though I need more land.  I’m already out of space for the roses. The best part?  I noticed a large deposit in the brokerage and retirement plans and realized it was the Wells Fargo dividend, newly increased!  While were out enjoying the day, the bank was generating more capital for me, which was what I always dreamed of when I was a child.  It’s a nice feeling.  Now, I just need more.  More shares; more dividends; more assets.  Most of it is going to charity in the end, anyway.  I love seeing it grow.  On that note, Aaron and I made a decision that this summer is going to be like our first start-up year – we are both going to put in 60 to 80 hours a week to launch something, expand what we have, or do something interesting.  As he put it, we’ve been in harvest mode, living off our fruits.  Now it’s time to challenge ourselves once more.

I fired two of my brokers.  I’m consolidating money with what will now be my primary custodian.  The minimalism / simplicity project continues on that front.  The reduction in paperwork and digital confirmations should be noticeable.

Otherwise, that’s it.  I need to do my household banking, updating the accounting system I use now that it is past the first of the month.  I also need to edit my About.com newsletter, which goes out tonight.