You know that old television show 7th Heaven?  Sometimes, I think I live in it.  I was woken up this morning by my five-year-old niece, two-year-old-nephew, and grandmother (their great-grandmother) calling a phone I keep beside my bed.  She (my grandmother) was watching the kids; they missed us and wanted to talk since we hadn’t seen them since last weekend.  I managed to understand about half of it with my eyes still partially closed – something about a new car, friends from Church, upcoming birthday party plans, several “I love you’s”, a few more, “Joshie, I’m going to be six.  Six!  Can you believe it?!”, and a ton of other stuff I couldn’t quite grasp.  If you’ve ever been around a kindergarten-age kid going a mile a minute, you know that kind of frantic excitement, while the two-year-old is in the background gibbering and jabbering, trying the grab the phone.  It was adorable.  She’s really into birthdays; for my 31st last month, she gave me a piece of purple construction paper, adorned with a giant heart surrounded by four neon orange lines of duct-tape, accompanying a giant rock that now sits proudly under the rose bushes.  She beamed when it was presented to me.

[mainbodyad]About twenty minutes later, I’m ready to get up and start my day.  I hear a ruckus and discover my mom had come in through the garage and was talking to spouse in the kitchen.  She announced that henceforth, every Monday, we will be cooking together so she can try all of the recipes I’ve been putting on the blog.  We all skipped work, started throwing open the massive collection of cookbooks and recipe notes, with plans to cook a little of this, a little of that, rate it, and decide what should get added to the permanent collection.  All of the leftovers were to be divvied up at the end of the evening for food this week so the extended family gets to enjoy the fruits of this culinary school du jour.  Though, sometimes they aren’t always pleased with that.  We have one or two older relatives who hate that we cook.  They don’t understand why we can’t ever make them “real” food like – and I quote – “heat[ing] up some Campbell’s vegetable soup”.  I think a little tiny part of my soul cringes every time I hear it.  They get so upset, visibly upset, every time they come over and are served something like a slow-cooked roast simmered in red wine and vegetables, preferring instead a shelf-stable can of Dinty Moore.

I began making menus and came upon a handful of recipes that I cannot wait to try later this winter.  Particularly, a red velvet cake that I am going to jump all over the first chance I get.  Whenever I do, I’ll post the pictures, process, and verdict, along with a link to the recipe so you all can decide whether you want to make it for yourself.  Judging by the ingredient list and preparation technique, this is going to be a winner.  Meanwhile, we re-made the homemade stuffed ravioli with two different sauces, so my mom could learn it.  They worked on a freshly made spaghetti with marinara sauce.  I had her try a bell pepper parmesan penne I made last night, which was kept in the refrigerator.  We whipped up a pumpkin latte mix that came highly recommended (but failed, horribly, to meet our standards).  They worked on a spiced pumpkin roll cake with cream cheese filling.  We were going to do several other things – I was hoping to give it a go at some raspberry or blueberry-filled diamonds covered in a chocolate ganache (sort of like this one), but that will have to wait for another day.

At one point in the afternoon, I ended up on the phone with my other grandmother, the 83-year old one we went and visited last weekend, talking about the family history to respond to a message from the contact form.  That was when I wasn’t writing reading through more S&P tear sheets.  I spent some time working on overhauling a few of my relative’s retirement plans by moving them out of some expensive funds (annual fees run 1.5% or higher), to a custom index I designed consisting of a balanced portfolio of dividend-growth companies with extraordinarily good economics that happen to be well-priced at the moment.  It’s equally weighted, but tends to skew toward mid-and-large-capitalization companies.  Over the next 15+ years, it should result in a massive savings to them.  When they actually retire, they’ll fill out a form and the dividends will be aggregated and swept into their personal checking account as if it were a paycheck, augmenting their household income.  Short of the initial commission to acquire each position, I’ve arranged it so they will capture 99.99%+ of the underlying performance of the assets they own, crushing even the cost advantage of an S&P 500 index fund.

My brother was supposed to make it over but was busy studying for medical school, so we made to-go portions of the dessert and had them dropped off at his house.  I don’t think any of the food ended up staying here, but I could be wrong about that.

I have pictures of the family, but since I’m making this post public instead of hiding it behind the privacy wall, I’m not putting them up.  Instead, it’s a sampling of some of the work product. For dinner, my dad ended up joining the rest of us at the house and we re-made the pan-roasted chicken with rosemary, garlic, and white wine, served with a side of buttered green beans. We re-made the pan-roasted chicken with rosemary, garlic, and white wine, with a side of buttered green beans for my parents to have for dinner. This is actually a picture of one I made a few days ago, as I was so busy with the different dishes tonight that I didn’t take new pictures it looks the same so this will have to serve as a stand-in. The parmesan and bell pepper penne from last night … The bell peppers I roasted yesterday in a garlic and olive oil mixture for the penne. 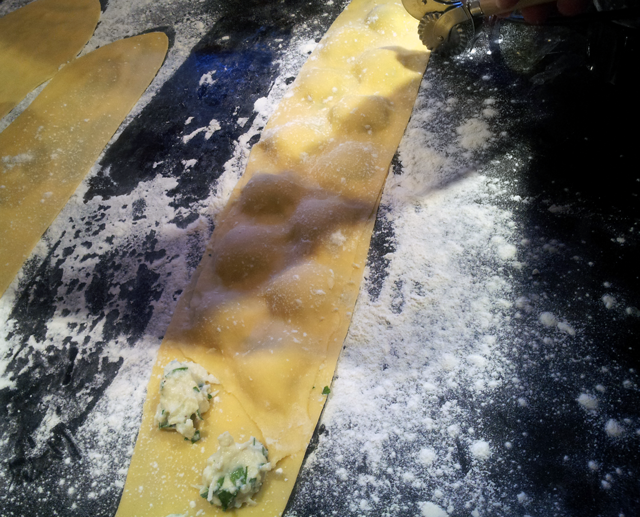 It’s now 12:44 a.m., and I still have quite a bit I need to finish before tomorrow.  Looks like I’ll be up late.  Or early.  Or however you define it.  It was a great day, though I’ll need to do double time tomorrow to clear a few things off the agenda.  I also need to go to the gym, even though the portion sizes were small and I only sampled about half the food.

I should start a YouTube cooking channel to find a way to write-all of this off my taxes.  Maybe I should call my accountant.  I wonder if that can be done, or if it would be worth it.  I bet I could generate a ton of views within a few years.  Though that might be a distraction.  Rambling.  Sorry.  Back to work.  That’s how my mind functions sometimes.