Back when Dave Thomas left his discipleship of Colonel Sanders of Kentucky Fried Chicken fame to go off and start the hamburger chain that we now know as Wendy’s (which he named for his daughter, Melinda) one of my favorite things he did was find a way to reduce waste – and thus costs – while increasing revenue by introducing a chili recipe on the menu.  The freshly made hamburgers that had not been sold in time were added to a simmering pot, broken down, and still converted to profit rather than ending up in the dumpster behind the restaurant.  It was, and remains, one of the cheapest items on the menu and despite packing a whopping 23 grams of protein and a mere 5 grams of a fat, a large cup contains only 250 calories; a far cry from the typical menu offering at fast food joints.  He talked about the “marathon cooking sessions” they did to find the right recipe so they could salvage inventory before it went bad.

The chili plays a role in one story in his now out-of-print autobiography, Dave’s Way.  I remember reading in my early twenties because it instantly became a reminder to focus on the things that matter, not just the details, if I wanted to make a lot of money; that, while minutia matters, it’s secondary to selling something and delivering it to the customer at a price higher than the cost it took you to hand it over at the exchange point; that if you can’t accurately measure those costs, you’re going to have a bad time.  Specifically, he wrote:

Today, too many MBAs make a lot of money BEFORE they’re thirty, and all they know about business is how to read profit-and-loss statements.  And I’m not real sure how well some of these MBAs do reading P&Ls.  One time, I was invited up to Cambridge to speak at the Harvard Business School.  During the question period, two students in the audience argued with me that Wendy’s was making extra money on our chili because we had already accounted for the meat as a hamburger patty that was cooked too long to be served as a hamburger.  At first, I thought they might be funning me.  After a while, it was clear they were serious.  I had to explain that we still “owned” each patty until we sold it to the customer as either chili or a sandwich.  If it was chili, then the meat cost was just a part of the chili.  That was one scary experience.  It’s the only time I’ve ever thought that dropping out of high school might NOT have been a mistake.

For context on the last line, Dave was a high school drop-out who decided that, despite building a multi-billion dollar business and amassing a nine-figure net worth, he wanted to set a good example and return to get his GED, which he successfully did later in life.

[mainbodyad]Why am I thinking about Dave Thomas and his chili recipe?  A few weeks ago, we began looking for versions of Wendy’s chili recipe we could make at home.  The one we kept coming across, reprinted on virtually every major recipe site on the Internet, was the adaptation Todd Wilbur did in his book, Top Secret Recipes: Creating Kitchen Clones of America’s Favorite Brand-Name Foods.  It was simple, easy, and relatively inexpensive (the entire recipe makes a lot of chili and costs $18 per pot, which you can further reduce if you double or triple the proportions and buy your meat and spices in bulk).  It gets better the next day and holds for awhile in the refrigerator so it’s great for leftovers whenever someone wants a quick meal that can be reheated almost instantly.  You can garnish it or enhance it however you want – with sour cream, grated cheese, saltine crackers, vinegar, it all works – and is, in our opinion, much better than the chili from our local Wendy’s franchise.

Here’s a step-by-step guide to how we made it.  Note that we used a 5.5 quart Sonoma Green Le Creuset French oven from Williams-Sonoma this time around and it was barely large enough to contain all of the chili ingredients at the start of the simmering process.  If you have a 7 quart pot or oven, use it, instead, or else you are going to have to stir very carefully. We took 30 ounce cans of tomato sauce, pinto beans, and dark red kidney beans, dumping them in our pot (or, in our case, a French oven), along with all of the bean juices for liquid that will boil away during the cooking process. The recipe technically calls for 29 ounces but we used 30 ounce cans and it didn’t make a difference. Cut up 1 medium onion or 1 cup of onion.  Normally, we prefer to use a red or purple onion for a chili recipe like this but we only had yellow onions on hand so we increased the proportion a bit. When we made it before using a medium red/purple onion, it was really good but it’s no big deal if you don’t have one.  Throw it in the pot. Cut up two juicy, fresh, spicy jalapenos (we left in the seeds for extra heat).  Throw them in the pot.  Does the actual Wendys chili recipe have jalapenos in it?  I should check.  I don’t remember it ever being anything other than mild.

Right about now also cut up 1 celery stick but I didn’t take a picture of it.    Imagine it.  Picture it.  Do it.  Now, throw that chopped celery stick in the pot. Wash and dice three tomatoes for your chili. Dump them in the pot. Add 2 or 3 tablespoons of cumin powder to the chili recipe … we go with two because I’m not as crazy about this particular spice. Add 3 tablespoons of chili powder to the chili recipe … Add 1.5 teaspoons of black ground pepper to the chili recipe … And now for a special word from our portfolio … we used McCormick black pepper. I have shares stuffed in our accounts, my brother’s portfolio, my parents’ brokerage and retirement plans, my in-laws IRAs … It’s a magnificent business. Like most multi-nationals, the strong dollar is making it appear much more expensive. Sales are expected to jump by 4% to 6% but currency headwinds will make almost all of that (at least 3%) disappear if projections turn out to be accurate. 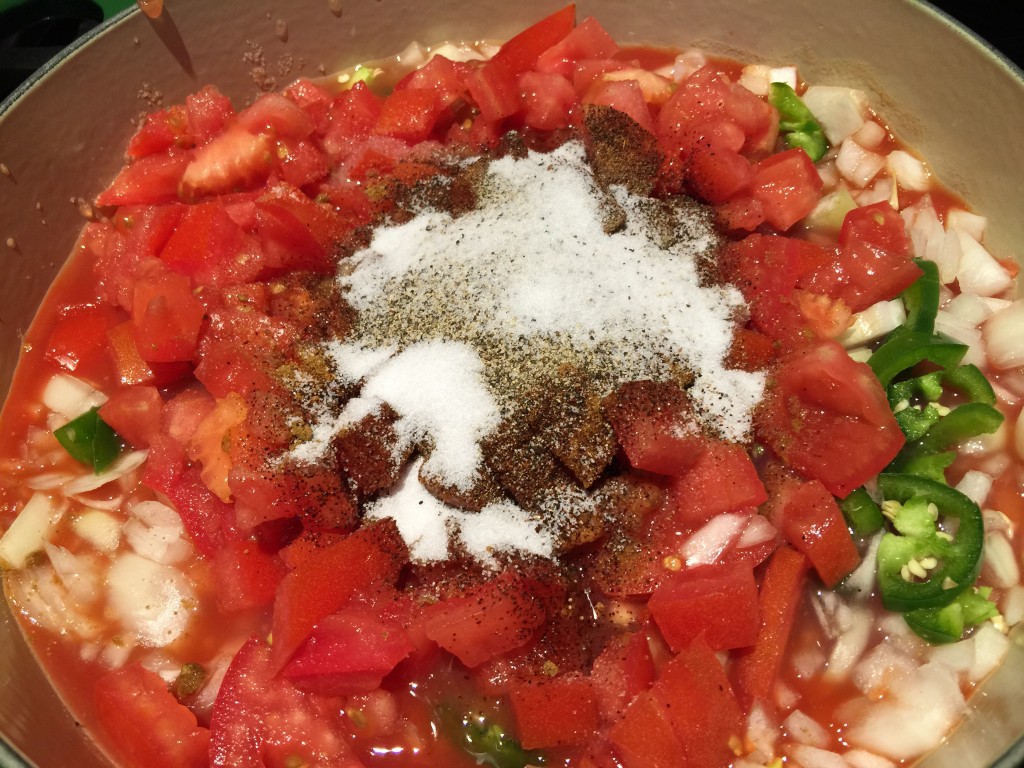 Add 2 teaspoons of salt to the Wendy’s chili recipe … 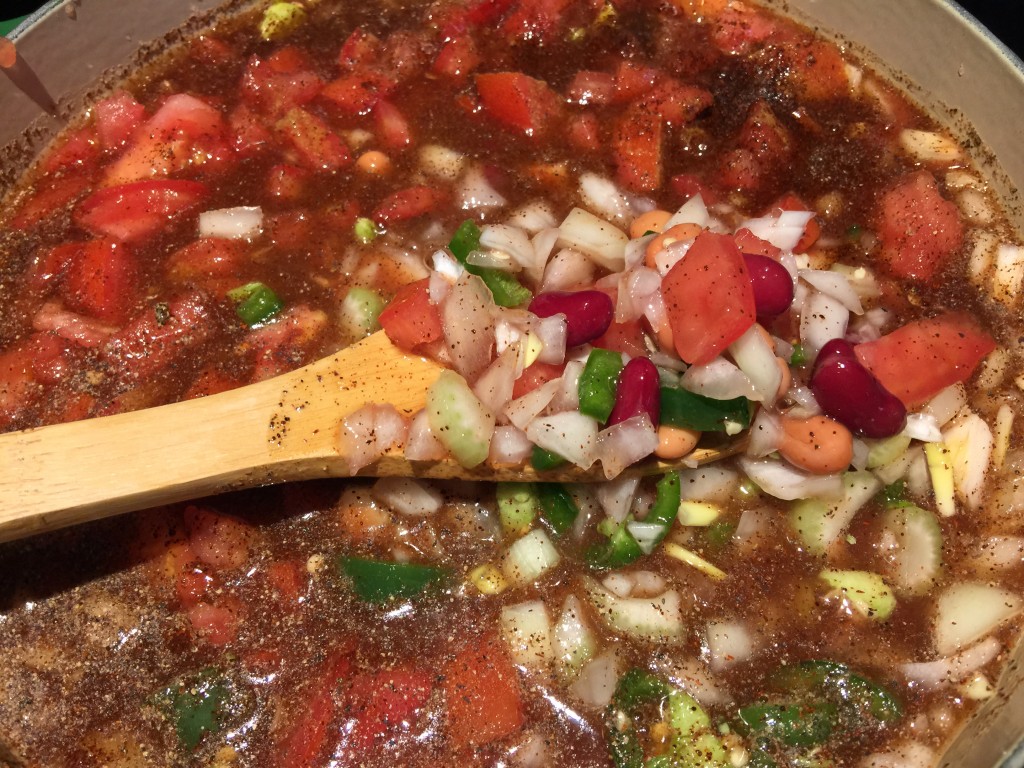 Add two cups of water to the chili recipe … Stir the chili ingredients together and put over medium heat while you turn your attention to the ground beef. Brown two pounds of ground beef for the chili recipe. Drain the ground beef of its fat and then add the beef to the chili pot, which should still be heating over on the other burner. Stir the chili pot together and turn the heat up to medium. Bring the chili to a simmer. You’ll notice the spices start to foam. Once it is simmering, reduce the heat to low but keep it hot enough it simmers non-stop for the next 2 or 3 hours. Stir it every 15 to 20 minutes to break up the film of spices that develops on top. Thicken, and stir … thicken and stir … some folks like it somewhat of a liquid, others like it almost solid and chunky, full of beef and vegetables.  It’s all a matter of taste. Once you get the chili to your desired consistency, serve immediately.  It’s better the second day, once the flavors have had a chance to come together overnight in the refrigerator.

This Wendy’s chili recipe is a great thing to have in your recipe box as an alternative to the white chicken chili recipe we shared back in July of 2014.  Though a funny thing has happened since we’ve been introduced to dishes like Dwaejigogi-bokkeum … somehow, someway, I now kind of want to introduce a few more jalapenos and maybe a serrano to crank up the heat even further.  Maybe dump in red pepper flakes.  You could easily modify this base recipe to make it painfully, and deliciously, tormentingly hot.