Aaron’s mom hadn’t been to the symphony here in town since the new performing arts center opened so we decided to take her to dinner and a performance.  I completely forgot it was tonight because I started my first Korean drama in two months a few days ago and had scheduled some time to watch more episodes without interfering with work.  (The last one I watched was Pasta back in January so I made it almost 60 days without giving in to the temptation to begin another until Heirs started calling to me despite the absurdity of 27+ year old people playing sophomores in high school.  It’s so hard to believe that I didn’t even realize until a few episodes in I was watching what were supposed to be teenagers as the main character is self-sufficient, traveling to another continent, and talking about university.)

[mainbodyad]Somehow, I summoned the inner strength to pause the show near the pivotal moment early in the storyline when Kim Tan declares his love for a lower class girl, Cha Eun Sang, the daughter of a mute maid in his parents’ house.  It’s not going to go over well because he’s engaged to a girl who has a family that has been buying up shares in his dad’s conglomerate, and now are hovering below the 3% line following an 800,000 share block purchase.  The marriage will align their interests and stave off a power play for control of the holding company.  Meanwhile, I’m thinking, “Bad move Chairman.  This could have easily been solved by a dual class listing structure with disparate voting rights like McCormick & Company or Brown Forman, but now you’ve made your bed so you have to lie in it.”  His children are going to be trapped in loveless marriages because he has the wrong capitalization structure.  Amateur.

Anyway … We decided to try one of the higher rated restaurants downtown; a place called Pierpont’s in Union Station.  The verdict for my fellow Kansas City residents?  It was good.  The food itself was more than satisfactory, certainly better than the comparably priced Providence New American Kitchen (specifically, dinner itself, including two iced teas and a coffee, came to only $170, of which $140 or so was food and $30 tip, which we all felt was more than acceptable for what we received).  We each went with a four-course meal that allowed us to choose one item off of four different selection boards, spaced out over a couple of hours.  I’d have no qualms about returning and spending the same amount to try a different set of offerings.  It felt fair.

All in all, it was a pleasant experience.  The only thing I’d change would be the rose-colored lights in the section of the main dining room where we were seated, which interact poorly with the mustard walls and yellow lights elsewhere, giving some of the food a somewhat turpid color during sunset, which was entirely an illusion that could have been unique to our particular seat, angle relative to the window, and time of day.  I corrected the photos I could with a Photoshop filter that removed the effect but it wasn’t possible to undo it completely. Union Station was at one time the largest railroad depot in the area. It is now a collection of museums, restaurants, stores, and an Amtrak station. It gets a lot of interesting traveling exhibits. A few years ago, the original scrolls that make up some of the Bible came through from Israel, now they are about to debut a massive recreation of King Tut’s tomb to give people an idea of the scope and scale of its immensity. Walking through the lobby of Union Station to get to the restaurant … it’s so huge that even though the individual restaurants were full, it feels empty. This place was meant to accommodate throngs of peak traffic in an era before the highway. 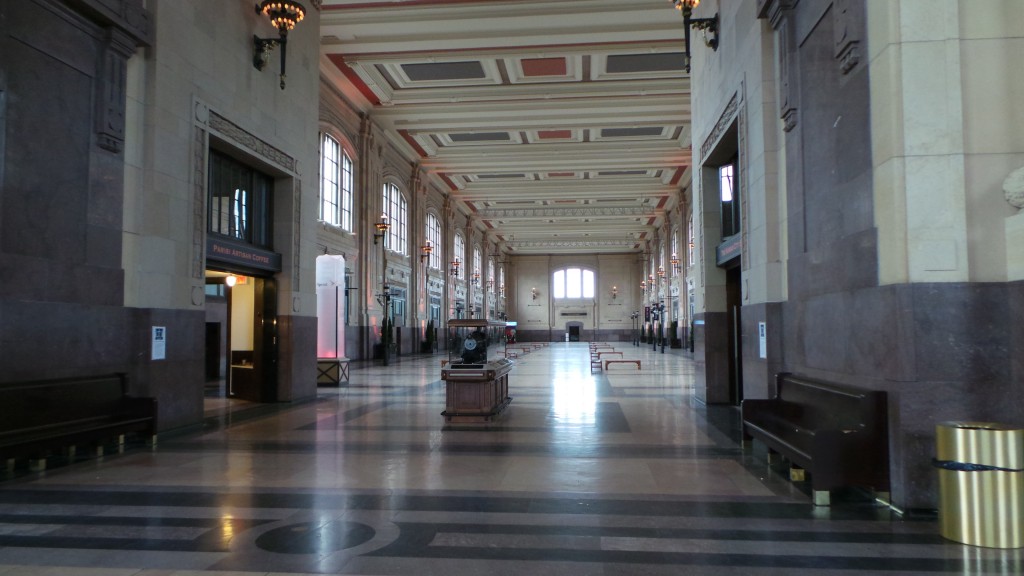 Looking down a side annex in Union Station … After dinner, I captured a photo of the huge, ladder-access bar area you have to walk through to get to the dining section.  Aaron pointed out that the phrase “top shelf” really means something here. The menu at Pierpont’s … This was the business owner in me admiring the hot stamp job on the material. Both Aaron and I had the Artisan cheese plate as the first of four courses. For her first course, Mary had the lump crab cake with grilled tomato mustard sauce. Mary and I both had the blue crab and sweet corn bisque with herb oil for our second course, which was amazing. Aaron went with a Caesar Salad. Mary had the filet mignon with a cognac sauce on the side over garlic mashed potatoes. Aaron and I had an Ancho chili and coffee rubbed steak with garlic mashed potatoes and asparagus for our third course.  Again, we were eating under a rose colored light with yellow-and-mustard hued walls, so it was hard to get a good picture. I tried to remove the color saturation with Photoshop but the pink from the lights still remained in the juices from the steak so you’ll have to use your imagination. It was delicious and far more appealing in real life. Mary and I both had the white chocolate bread pudding with rum and spiced caramel apples, flambeed table-side. Again, the constantly changing colored lights, combined with a setting sun, wrecked havoc with the photos. Bread pudding is now added to my recipe list. I need to figure out how to make several good ones. Aaron had the vanilla creme brulee with berries for dessert.

We have 15 minutes or so to make it over to the concert hall.  We’re most excited about hearing Rodrigo and Prokofiev.