We’re making Christmas candies, chocolates, and cookies as part of our gift strategy this year.  I’m probably most excited about trying my hand at the Jacques Torres Nougat Montilimar, which is going to require a deft hand.  (It looked promising, and we stopped in one of his chocolate shops in New York a few years ago so I have a general idea of what to expect.)  I’m also going to try cherry cordials, amaretto liqueur cake, rum cake, and a few holiday breads.  Aaron wants to give truffles a go.  We have to figure out our chocolate recipe, and now that we found a local supplier, we’re using the same base Guittard that many famous candy businesses use, including See’s, which buys it in bulk and modifies it to get the distinct flavor for which it is known.  What will Kennon Green chocolate ultimately taste like?  We have no idea.  I suspect it will take us years to settle upon an agreement as we tend to feel passionately about these things.

Tonight, we’re starting with the easiest, most basic stuff that doesn’t require a lot of tempering, care, or effort, making sure we have tons of variety of each brand to accommodate anything and everything we might want to try.  I wanted to test using Sharffen Berger chocolate, the high-end, true, honest-to-God chocolate manufacturer (very few chocolate companies in the world actually turn the cocoa plant into the finished product) but it would take a few days to get here from California and we started this on a whim after grabbing dinner.  Which is ridiculous, in a sense, considering they are owned by Hershey’s.  Then again, so is the Cadbury license in the United States and I can only find it in bars, too.  Nestle isn’t much better.  It owns Cailler and good luck finding those in Kansas City.  (And what’s up with Lindt’s refusal to sell anything but retail bars?  We used them in the white chocolate nectarine pie but that is a horribly inconvenient way to try and make candies.  I’d have opted for Lindt if they had baking slabs for projects of scale.  They only do so through their Ghirardelli line, which is great but doesn’t have the same flavor.)

Regardless, we decided to kick off the process with an 8-minute recipe that can’t even be considered cooking as it is more assembling.  (It really is that laughably easy.  We went with it first so we could have a break after our our tests yesterday for the brandy or cognac reduction.)  Anyone should be able to do it.  You take chocolate chips, add fat to change the chemistry, melt them at the proper temperature, mix them with nuts, form clusters, and let them cool.  Here’s how Hershey describes the process, though we used a double boiler to be more more specific on our temperature guidelines as well as substituted almonds for peanuts. We’re going to be making different kinds of chocolates, cookies, cakes, and desserts for everyone this Christmas season.  This was during my Hershey inventory.  Fun fact: If you ever want to entertain yourself, ask a French citizen who is a chocolate purist about his or her feelings toward Hershey’s milk chocolate line.  Stand back and watch the fireworks.  The irony is sublime.  With few exceptions, the same Parisian who will go on and on about the virtues of differences in cheeses such as Roquefort and Tomme De Savoie will likely spew venom about the slightly sour taste caused by the presence of what is believed to be butyric acid, which reminds them of stomach acid as it is the same compound found in goat milk, buffalo milk, sheep milk, butter, and vomit.  Most are unable to appreciate the differences, accepting each for what it is, to the point it’s comical.  Hershey stockholders need not fret, however, because they hold the license to manufacture Cadbury, Kit Kat, and other brands in the United States, too. There was a 40% off sale at Michael’s on Christmas tins.  We’re going to use them to wrap candy for different people as a stocking stuffer! Chocolate, or in this case, white chocolate, is such a beautiful sight. 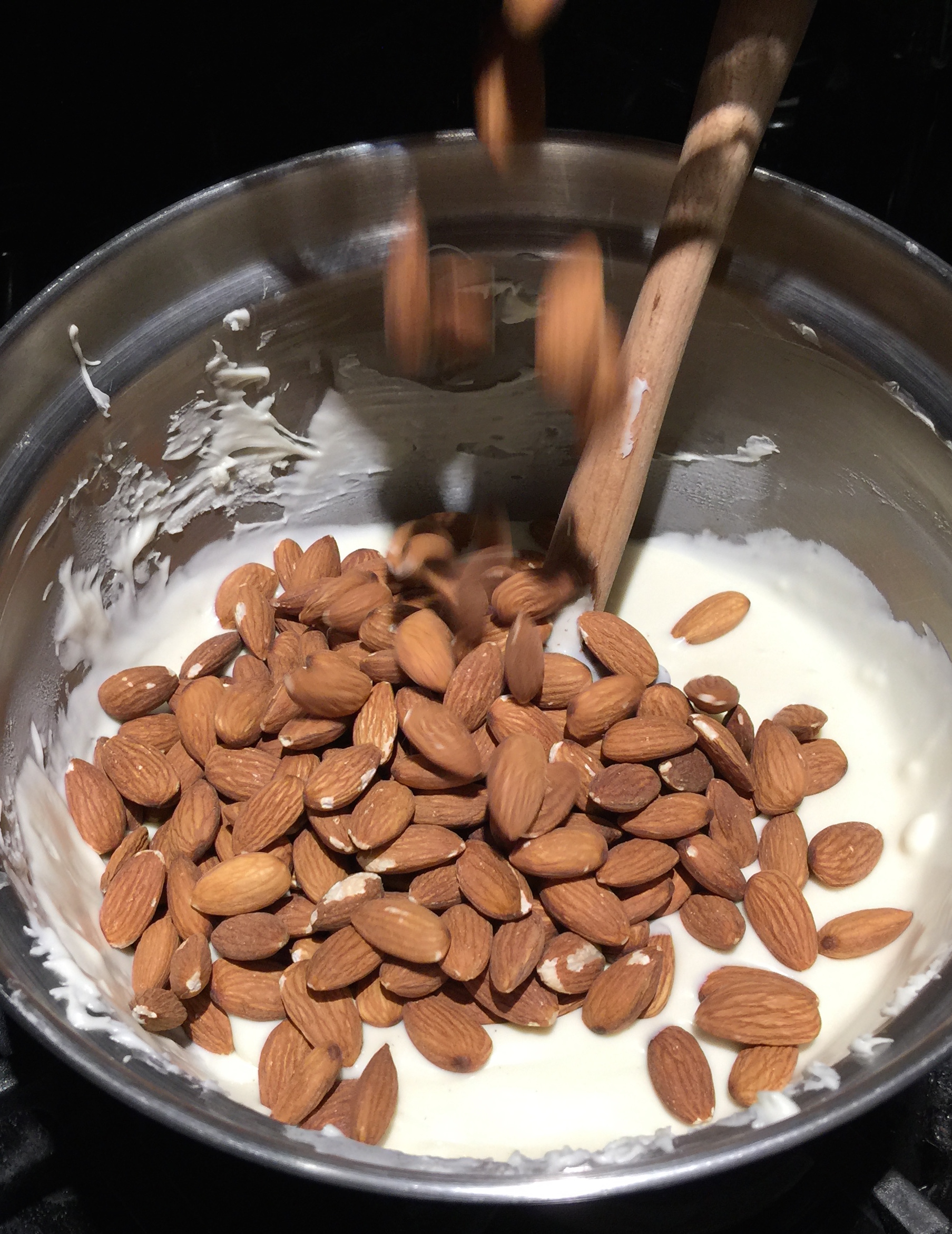 If you want bulk almonds, Sam’s Club has them at a fraction of the cost in your local grocery store. So good.  It reminds me of one of the candy recipes I plan on making later, which requires a cream cheese coating on pralines into these old-fashion caramelized bites. 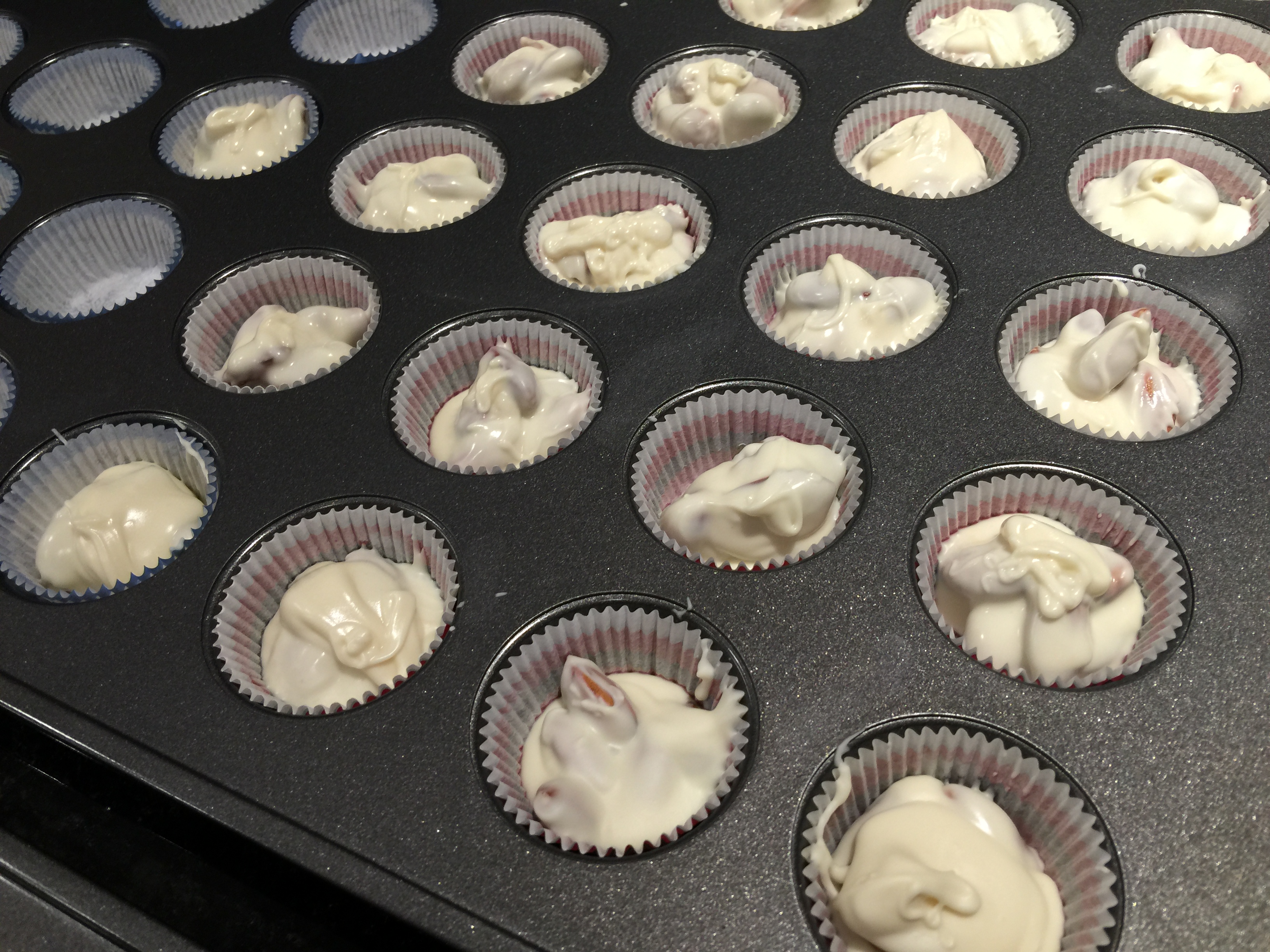 That’s right.  Get in those cups. Milk chocolate has a burn point of 115 degrees Fahrenheit so never exceed it!  Right now, as you look at this picture, you should hear the first few notes of Marvin Gaye’s 1970 classic, “Let’s Get It On”.  That’s a beautiful sight. These will sit overnight and we’ll get started on the next phase tomorrow.

Even if you can’t cook, give these a try. Really, I mean you have to melt chocolate, mix in nuts, and form them into clusters. It’s not like you’re making vanilla sugar and chocolate bonbon with Raspberry Ganache. Though you can try that, too. We probably will!  You have to start somewhere and this is fun enough you’ll probably enjoy it.