After leaving the Ralph Lauren flagship store, we were exhausted.  We had been walking almost non-stop since arriving a few days ago, yet I had woken up this morning and walked around by myself for .6 miles, then we took a cab up to meet Erika for lunch, from where we walked 1 mile along Madison Avenue and saw the Bond No. 9 store, the Creed boutique, and finally Ralph Lauren.  There were a few other stops along the way, such as the Etro boutique, but that about covers it.

We decided to meander our way over to the Plaza Hotel / Tiffany & Company / Bergdorf Goodman area and figure out what to do about food.  It had been hours since we had our salads.  We walked the entire way – very, very slowly at this point – which was 1 mile.  This put me up to 2.6 miles. We passed a beautiful Beaux Arts style building as we made our way toward Central Park.

We went into the Plaza Hotel and I thought it would be fun to do high tea, just like back in college, but that didn’t work out for reasons I don’t want to get into right now.  We headed down to the cafe and tried a couple of the chocolate desserts. The little vanilla and chocolate desserts looked beautiful. The three of us tried a bite of each. The caramel in one of them was so terrible we couldn't even finish the bite but Aaron didn't mind that flavor so he took it.

We had been meaning to come back for six years and it was a complete and total letdown.  We decided to visit the nearby Bosendorfer dealer another day, instead.

My mom had wanted to try some famous chocolatier called Jacques Torres and we knew he had a shop in Rockefeller Center.  So, we walked out onto the street and made our way toward Rockefeller Center, which another .8 miles.  By this point, I had walked 3.7 miles.  That was

We arrived and finally found the chocolate shop.  Even though I had only had a caramel macchiato, a salad, and the few bites of chocolate at The Plaza Hotel cafe, I wasn’t really in the mood for anything extensive so I got a mudslide, which consisted of a double chocolate cookie, warmed and melted, with a cup of cold milk.  It was perfect! The chocolate chip cookie I ordered was warmed and melting. The cold milk was perfect with it. Jacques Torres gets five stars in my book. 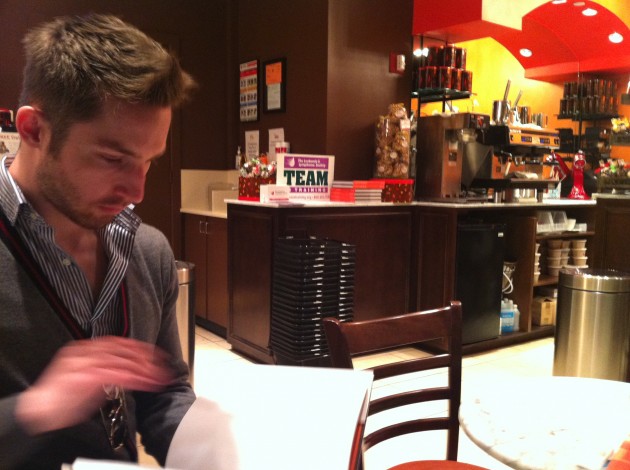 Aaron at Jacques Torres Chocolates ... I don't remember what he was reading and I grabbed this picture when he was still in the process of flipping a page. My mom tried some chocolate covered macadamia nuts, which were so good she and Aaron later went back to another location to buy for my dad when we returned to Kansas City.

From here, we went to the huge Banana Republic but were so tired that we wanted to get back to the hotel.  Aaron said he would just come back on his own later.  Besides, with nothing but coffee, chocolate, and salad in me, I wanted some real food.  More walking and we finally made it back … For dinner, we wanted an authentic New York pizza, which are very different than the kind you get in Kansas City. We checked some reviews and ended up ordering from Angelo's on West 57th since they delivered to the Palace Hotel. The reviews were right - it was very, very good. It was a great day.  Counting the shops, we probably ended up walking at least 5 miles.  I’m tired.  Aaron is going back to Banana Republic in Rockefeller Center and I’m going to settle in for the night.