One of the first things I did when my original company became successful was to order a Douwe Egberts coffee machine for the breakroom.  For the uninitiated, Douwe Egberts coffee is the best in the world.  There are no exceptions.  In fact, I was visiting someone in a town called Branson, Missouri several years ago and there was a restaurant that had the perfect cup of coffee.  The waitress was kind enough to take the time to go into the back, write down the name of the machine, open it and find the precise blend of coffee inside, and gather a lot of other data that went above and beyond what I asked.

Basically, this has no meaning to anyone except those of you who knew me growing up and realized how much I wanted this machine.  It’s … it’s everything that it promised to be and it doesn’t get old.  It’s so amazingly cool to me that all I wanted when I was ten years old, reading Value Line reports in that little wooden library cubical was to have my own office, invest money, and drink coffee out of gold rimmed china.  I’m there.  Now, It’s just a matter of compounding and seeing how big I can get this empire.

How the Douwe Egberts Coffee Machine System Works
The principle behind the system is that each cup of coffee should be absolutely perfect, brewed in seconds, and taste precisely the same as the 1,000 cups before it and the 1,000 cups after it.  To do this, the coffee itself is brewed in factories by white-gloved scientists roaming around with clipboards, examining every stage of the production process.  The finished coffee is concentrated to an incredible degree and shipped in frozen boxes to distributors, which then take them to restaurants and offices.  The Douwe Egberts system machines reconstitute the coffee based on your desired brew strength inputs, infusing extremely hot water and dispensing the finished cup in a matter of moments.  Thus, there is never any brew time or waiting.  You simply walk up to the machine, press a button, and your perfect cup of coffee is in your hands before you realize what’s happened. 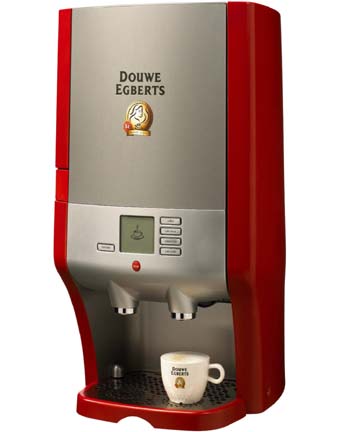 The Douwe Egberts Cafitesse C60 coffee system machine allows us to brew coffee, cappuccino, espresso, and other beverages in a matter of seconds. It was something I had wanted for years and when the original company became successful, it was brought in immediately.

The Machine We Bought and Had Delivered
The specific machine we bought was the Douwe Egberts Cafitesse C60, which allows us to make cappuccinos, espressos, black coffee, and one other drink of our choice.

Cost of the Douwe Egberts Coffee System
Ordinarily, the machines are provided as a result of the volume of coffee ordered by the office or restaurant.  Since our business model is based upon an incredibly low amount of human effort, instead relying on technology to pair up vendors and our customers, we knew there was no way we would consume thousands of cups of coffee so we bought the machine outright and pay for periodic deliveries from a local distributor.  Off the top of my head, I don’t recall how much it cost but it was a couple thousand dollars for the machine alone, then we had to have it hard wired into a water line so it could work effortlessly.  I want to say the coffee itself and supplies are somewhere around $200 or $300 per month.  Again, I don’t remember but I’m fairly certain that’s close.

Burger King Now Uses the Douwe Egberts Coffee System
As a matter of fact, a few years ago, Burger King switched its entire coffee system to Douwe Egberts and its sales in the category have markedly improved according to the releases sent out by corporate.  The guy that setup our machine actually told us that he could match the exact percentage settings if we wanted to replicate the taste by modifying the reconstitution numbers but I actually went a little bit stronger because I like a severe kick to my coffee (not Starbucks strong, though – the beans are great when making black coffee at home but I’m not a fan of how they brew them for ordinary black coffee in the stores).  Recently, though, Burger King switched to Seattle’s Best coffee, meaning I no longer go out of my way to get a cup from there.

A Warning – The Senseo Douwe Egberts Coffee Will Not Taste the Same!
If you think you can recreate the taste of the restaurant version of Douwe Egberts coffee with the Senseo coffee brewer or ground Douwe Egberts beans, listen to me carefully: You will fail.  It cannot be done.  It has to do with the brewing process and how the coffee system is put together. It’s good for what it is, but don’t expect to create the restaurant flavor and experience with the ground version of Douwe Egberts coffee for the Senseo machine.  Trust me, I tried.

I speak from experience.  I bought roughly a dozen different coffee machines, including the Senseo, and tried every derivation possible to get it close and it never tasted like anything more than regular store-brand coffees.  If you are going to do it, and you love the DE brand, get the machine.  It’s some of the best money we’ve ever spent.

Then again, I’m passionate about coffee.  My personal philosophy is to spend money on the things that matter to you and take conventional wisdom with a grain of salt when it comes to how you “should” manage your affairs.  For instance, hell would freeze over before I would ever buy a mini-van.  That may sound extreme, but the notion of making a decision based on the practical ramifications and not counting the emotional inputs is foolish, short-sighted, and a primary cause, in my estimation, of why so many people suffer the oft-recognized, “life of quiet desperation”.