A few minutes after midnight, my entire family and their respective spouses, minus one of my sisters, met at a local movie theater to see the premier of Man of Steel, the new Superman movie.  When it was over, we went home to take a shower, change into something comfortable for travel, and head to the airport to fly first into Denver, then later into Anaheim for the 10-year anniversary Disneyland trip with some of our oldest friends from college.  This will be the first year in awhile we haven’t gone to Walt Disney World in Florida for seven or nine days, instead opting for a quick weekend trip in California.

More than 1,600 miles later, we are now in Southern California, the land where my father grew up as a child.  The weather is so much better here than in Kansas City that if the state didn’t have such a ridiculous income tax structure, I’d buy a house and move tomorrow. Flying Out of Kansas City to Disneyland … 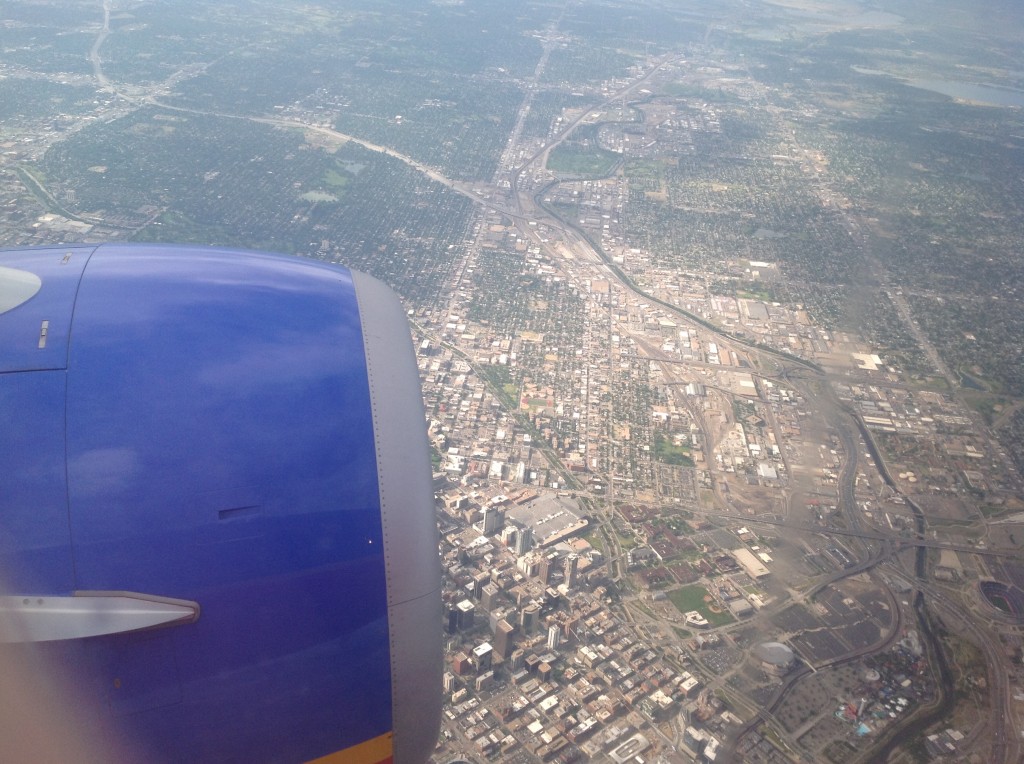 We had a layover in Denver then continued on to Anaheim …

Here is what it looks like to fly over the Rocky Mountains if you’ve never made the trip yourself (given that there are now a decent amount of international readers, it’s possible).

Flying Over the Rocky Mountains from Joshua Kennon on Vimeo. We walked into the Hilton hotel and were greeted by an unexpected surprise … a huge, real-life display of the varsity letterman jacket product we made for the Disney corporation for Monsters, Inc. I saw the prototypes laying around the office years ago and one of the finished manufactured goods was staring me right in the face. The trip was already magical. It was cool to see kids posing with it, their parents all excited. Ashly, Ian, and Evan still hadn’t arrived so Aaron and I decided to go to Downtown Disney, grab something to eat at The Earl of Sandwich, and look through the art galleries. I was a fan of Hipster Mickey Mouse. We walked over to the main Magic Kingdom part, the most famous part of Disneyland, and decided to head in for awhile to await everyone else’s arrival. With the gardening projects at home, I should have realized that the very first thing we did was begin examining the plants and how they were organized. Whomever is in charge of the landscaping here is an artist. I have so many pictures of different plant configurations, tree setups, topiary structures … it’s amazing what they’ve accomplished. We rode the train around the park just to see everything, and passed the Matterhorn. I remember the first time I visited here in 1995.  I hadn’t had my birthday, yet, that year so that would put me at 12 years old.  It was my favorite ride in the park.  My dad grew up in California and coming to Disneyland was an ordinary thing for him; a day trip he and his friends and family would do whenever they wanted. I have an obsession with miniatures, replicas, and scale model items … to the point that whenever we encounter an awesome one, Aaron starts giggling and talking about how I am going to “Minimundus”, the name of a legendary miniatures park in Austria that I’ve always wanted to see. This was one of the coolest things I’ve ever seen. The description read, “In 1932, George Lloyd of Belleville, New Jersey began carving this model of the United States Capitol Building. David Lynn, the Capitol architect at the time, provided Lloyd with numerous photographs, drawings and blueprints to insure accuracy. Carved in Caenstone from the Normandy region of France, the columns, pedestals, caps, cornices, pediment, carvings and dome of this model were done by hand, cut to the scale of 3/16 of an inch to the foot. Lloyd finished the monumental feat in 1935.” It was so amazing you need at least one more shot of it. I think this guy accomplished more with this one project than all the hedge fund managers in world history combined.  Though that could say something about my priorities. I love this map of Disneyland. There was a video playing in the same room talking about how the map was the most valuable thing in the Disney archives because it was the thing that sold the concept to the bankers who financed the park. I’m not sure if they were talking about this particular map or not because I was too distracted by the scale model of the Capitol, but that was all I could remember picking up as I rushed the sculpture. Another one of the many landscaping and gardening photographs. I have so much respect for the men and women who manage the plants in this park. We found Sleeping Beauty’s castle and Aaron started laughing because it is so much smaller than Cinderella’s castle in Walt Disney World. He looked at it and said, “It’s like a large house. There are people with homes larger than this. It’s so tiny!” … I forgot just how much smaller of a scale it is than the Florida counterpart. We walked past some of the most iconic and famous rides, including the Dumbo flying circus, and saw the Matterhorn from a different perspective … The French Quarter is my absolute favorite place in any of the Disney parks.  Here, we ordered Aaron’s favorite drink – the Disneyland mint juleps. You used to have to get them from the Blue Bayou restaurant, but now they have a Mint Julep Bar where you can order them from a window. We spotted a French perfume store … and you know we can’t help ourselves. They were woefully low on selection and didn’t have any of the exclusives or rare scents but there were two ones that I might pick up …

After this, we figured we could check into the hotel so decided to go back before meeting up with everyone else, who were starting to arrive.

The hotel pool was visible from my room … and above it, if the camera had panned upwards, you could see the entire Disneyland park a mile in the distance. After the hotel, we walked back to the park and met up with everyone near the front entrance … 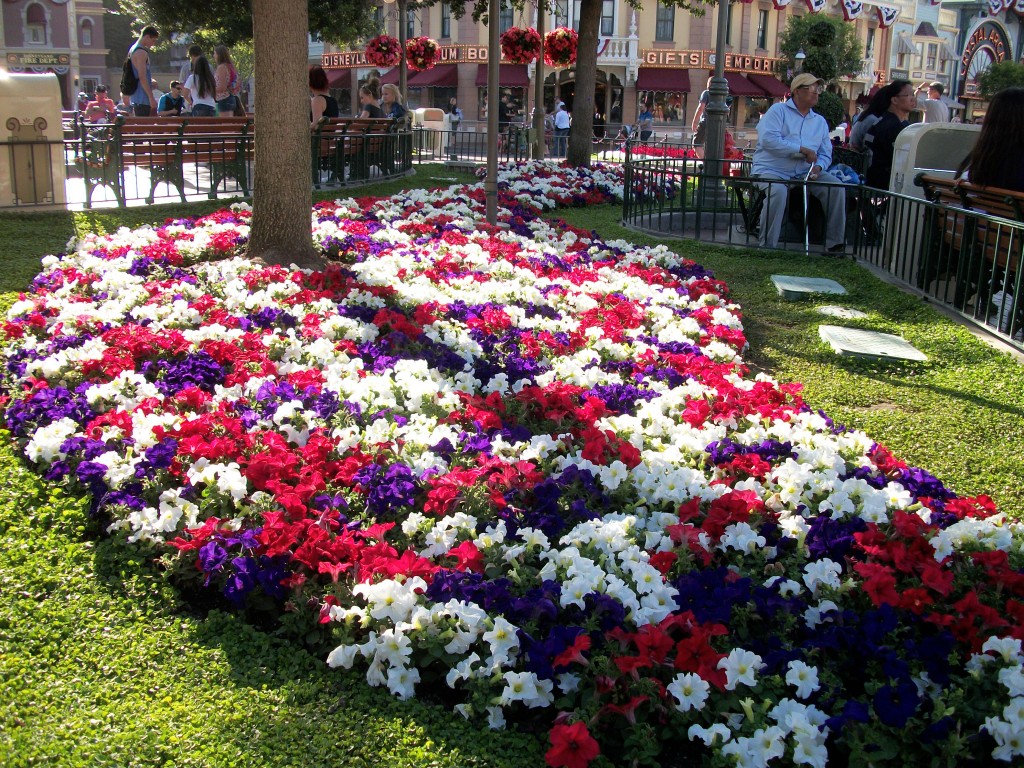 As we met Ashly, Ian, Evan, Linda, and Chuck, Aaron spotted another well-done landscaping setup and took a picture …

Hey, remember these pictures from Walt Disney World last year at Les Chefs de France?  Even though he was in his mama’s belly in that photo, it was the first time Evan was featured on the blog.  He’s all grown up … well, 5 months old.  Say hello! We went and ate with Ashly, Ian, and Evan, and had these amazing Monte Cristo sandwiches in the French Quarter. They were like ham and cheese sandwiches wrapped in a funnel cake sprinkled with sugar and served with a side of dipping fruit sauce. We walked back to the hotel … it was a wonderful walk, about a mile each way, which made me feel better about the Monte Cristo sandwiches. Those things were massive; I could only eat half of it but dear Lord they were fantastic. If you are anywhere near Disneyland, you need to eat one.  They are so good that if they were in New York City, Michael Bloomberg would have already banned them. On the ride back up, I noticed the elevators were made by Otis, a subsidiary of United Technologies. The shoes are a subsidiary of Berkshire Hathaway. I’m spending my time in a Disney park. Cue the Disney “Wishes!” theme because I’m living the capitalist dream. They’re all in the portfolio.

That night, you could see the World of Color in California Adventure and Magic Kingdom fireworks show from the hotel room.

I have to go to bed because we are meeting everyone in the morning, then having lunch at 11:15 at Club 33.