Sitting on my desk in front of me, as I type this article, is an analyst report by Morningstar for Wachovia dated December 31st, 2007.  This is the bank that was built almost entirely on the foundation of R.J. Reynolds Tobacco in Winston-Salem.  At the time, Wachovia common stock had closed at $38.03 and was paying a very rich 6.31% dividend yield.  The analysts at Morningstar valued the shares at $61.00, indicating they were nearly 40% undervalued. 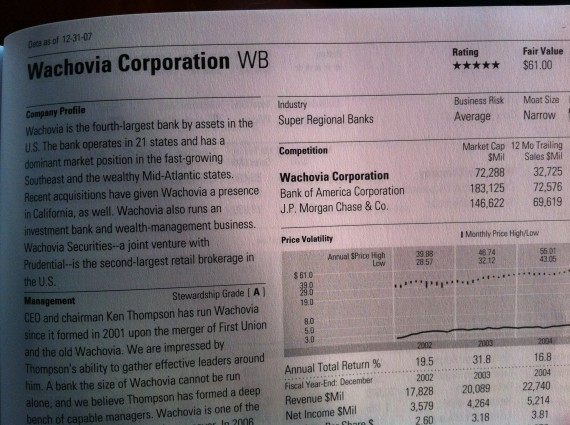 This is an example of why you shouldn’t let Wall Street analysts do your thinking for you.

When the report was issued, Wachovia was “the fourth-largest bank by assets in the U.S.  The bank operate[d] in 21 states and [had] a dominant market position in the fast-growing Southeast and wealthy Mid-Atlantic states.”  Oh yeah, and through a joint-venture with Prudential, Wachovia owned the second-largest retail brokerage firm in the nation.

The company was trading at 1x book value.  That is, if you bought a single share of Wachovia on this date for $38, you were buying the business at the historical, depreciated net accounting cost with no premium for the underlying earnings power.  Sounds intriguing, right?

In Less Than a Year, the Entire Bank Was Nearly Wiped Out

Within 10 months, shares of Wachovia were to be sold sold for $1 each, representing a near total-wipeout for equity owners. Had you bought the stock, it would have been utterly worthless to you for all intents and purposes.  According to the story that ran in The New York Times on September 29th, 2008:

Federal regulators worked around the clock this weekend to orchestrate the sale, finally reaching an agreement at 4 a.m. on Monday morning. In the end, the government agreed to provide Citigroup with a financial guarantee on Wachovia’s most risky assets. It is similar to the deal that the Federal Reserve established with JPMorgan Chase’s emergency takeover of Bear Stearns.

Citigroup will assume the first $42 billion on losses tied to Wachovia’s riskiest mortgages and will pay the Federal Insurance Deposit Corporation $12 billion in preferred stock and warrants. In exchange, the F.D.I.C. will absorb all losses above that amount.

Federal regulators said the move was necessary to stave off what could have been the second big bank failure in less than a week. On Thursday, the government seized Washington Mutual and sold the bulk of its operations to JPMorgan Chase.

The article goes on to explain that Wachovia had a stable deposit of hundreds of billions of deposits but it was killed by its Golden West Financial acquisition, which specialized in pay-option mortgages that customers didn’t, well, pay!  The losses quickly mounted and threatened to take down the bank as the dominoes fell during the crisis.

Under the deal, Citigroup will buy all of Wachovia’s assets and liabilities — a move that should protect Wachovia’s bondholders. It will acquire Wachovia’s big retail operations as well as its corporate and private banking. It will also take over Wachovia’s relatively small investment banking operations, which have catered to real estate and medium-size corporations. Citigroup is leaving behind the A. G. Edwards retail brokerage operations and Evergreen Investments, Wachovia’s money management arm. Senior management decisions have not been worked out, according to people involved in the talks.

With Wachovia’s branch network, Citigroup will now have one of the biggest retail banking franchises in the country after years of false starts. That should give Citigroup a larger platform to sell home loans and credit cards, and would give it access to more than $400 billion in more stable customer deposits. The bank has been aggressively trying to reduce its dependence on outside investors for funds.

The risk is that Citigroup could be saddled with tens of billions of dollars in losses tied to Wachovia’s giant loan portfolio. Wachovia has been hurt badly by its 2006 purchase of Golden West Financial, a California lender specializing in so-called pay-option mortgages. And the bank also faced mounting losses on loans made to home builders and commercial real estate developers.

To pay for the deal, Citigroup expects to raise more than $10 billion by issuing new shares of its common stock. It will also cut its dividend to 16 cents a share, the second time in the last year.

Wells Fargo and Wachovia Were Having an Affair

From this point on, Citigroup provided the funding for Wachovia to survive day-to-day.  But Wachovia was secretly meeting with Wells Fargo, who offered almost 7x as much money to the stockholders (still a fraction of book value, though, and rightfully so given the mounting losses).  Citigroup was furious but it is rumored that regulators forced them to back down with the FDIC wanting the Wells Fargo merger to be approved because not only would stockholders get more money, it removed the FDIC from the picture entirely due to the strength of Well’s balance sheet.

At the same time, the IRS announced that companies that bought troubled banks, like Wells Fargo buying Wachovia, would receive enormous tax benefits as a reward for helping stave off a collapse of the entire global banking system.  In a sense, Wells Fargo was able to use these tax breaks to get Wachovia for free. So Citigroup was forced to fund a bank that had secretly agreed to merge with someone else – sort of like if you were engaged to a girl who was taking your money and living in your house but who had agreed to marry another man and was planning on running off with him.  Only after you found out, your parents forced you to keep paying her bills or else they would shut down your trust fund.  And Wells ended up getting to ride off in the sunset with the bank for next to nothing.

If you had bought the stock at the $38 per share when it was trading at a fraction of estimated value, with a huge dividend yield and a low p/e ratio, you would have ultimately walked away with only 18 to 20 cents on the dollar following the Wells Fargo merger.  That is how bad the credit crisis was.

But if you owned shares of Wells Fargo & Company, once the world regained its footing, you were sitting on enormous earnings power.  Short of a black swan event, over the next decade, it would be reasonable to expect the bank to virtually print money from its offices.

The Lessons from the Wachovia Meltdown

There are several lessons we can take away from the Wachovia disaster.